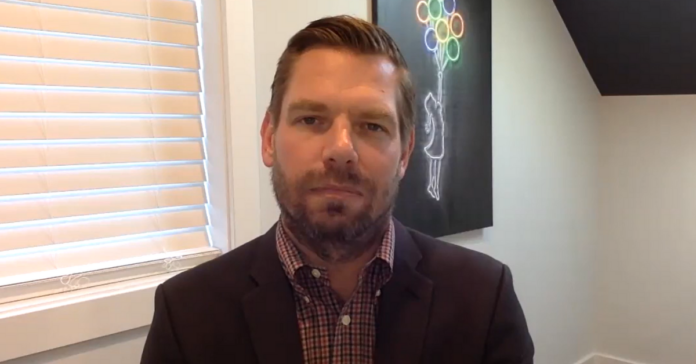 Dem showboat and failed presidential candidate Eric Swalwell is in hot water after disclosure documents show he spent a lot of money on alcohol and at a luxury hotel where his wife works.

Democratic Rep. Eric Swalwell of California spent tens of thousands of campaign dollars on alcohol and limousine services and over $20,000 at the same luxury hotel that employs his wife. The campaign dollars flagged by media outlets were spent on limo services, luxury hotels, high-end restaurants, and alcohol delivery services.

The charges occurred in the second quarter according to FEC records. The federal records show the campaign spent over $10,000 on 26 rides from various luxury car services. Swalwell’s campaign also spent over $26,000 on luxury hotels.

Of that $26,000, nearly $20,000 was spent at the Ritz Carlton, Half Moon Bay. Swalwell’s wife has been the director of sales at the luxury hotel since February 2015 according to her Linkedin.

The California congressman dropped $566 on “Food & Beverage” through the alcohol delivery service Drizly in nine separate orders ranging from $5.79 to $124.86.

Additionally, Swalwell spent $1,151 on “Refreshments” from seven trips to Capitol Hill Wine and Spirits, a liquor store local to the House side of the U.S. Capitol, and almost $4,400 at two California wineries on the same day for “Catering” and “Refreshments.”

While the payments to the wineries could have come from a campaign event, it is not clear that the seven charges at the Capitol Hill liquor store and nine Drizly charges were campaign-related.

The FEC records reveal the California Democrat’s campaign spent over $7,000 at luxury restaurants and steakhouses in D.C.

In addition, Swalwell appears to have sat down for 13 in-person meals at Charlie Palmer Steak, O-Ku Sushi, STK Steakhouse at the Downtown New York City location and other high-end eateries.

Swalwell also spent $205 at The Knot, a wedding website that lists registries, for "Supporter Appreciation" https://t.co/Uj4Fc0gtch

Swalwell spent thousands of campaign dollars on limo/luxury car services and alcohol, including over $20,000 to a luxury hotel where his wife is the director of sales

Hey @RepSwalwell, you're always so quick to chime in on any topic, got a quick comment for me here? https://t.co/eJla0iGV0a