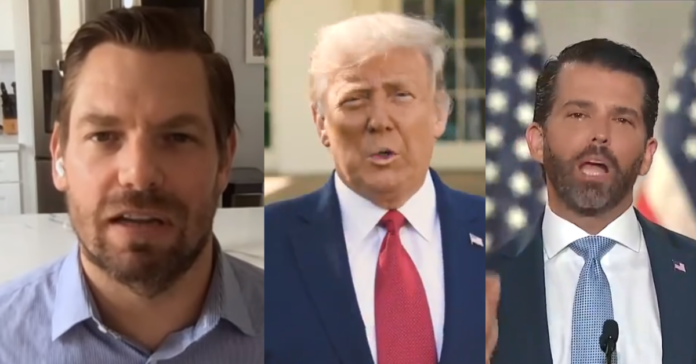 The failed presidential candidate Swalwell alleges in his lawsuit that Trump and his team are “responsible for the injury and destruction” resulting from the Jan. 6 attack on the U.S. Capitol.

The federal lawsuit filed on behalf of Rep. Eric Swalwell (D-Calif.) is skiing for unspecified monetary compensation and Eric is suing Trump and Brooks in their “personal capacity.”

Rep. Bennie Thompson (D-Miss.) also sued Trump accusing him of inciting the Jan. 6 riot in a suit brought by the NAACP. Both Thompson and Swalwell are accusing Trump of violating the 1871 Ku Klux Klan Act by trying to prevent Congress from carrying out its official duties.

The lawsuit — filed in the U.S. District Court in Washington, D.C., by the law firm KaiserDillon PLLC — accuses Trump and his allies of conspiring to violate the civil rights of the defendants.

“As a direct and foreseeable consequence of the Defendants’ false and incendiary allegations of fraud and theft, and in direct response to the Defendants’ express calls for violence at the rally, a violent mob attacked the U.S. Capitol, ” the complaint alleges.

Swalwell alleges that the defendants, “by force, intimidation, or threat, agreed and conspired with one another to undertake a course of action to prevent” Joe Biden from being certified as the election winner and holding office.

Trump and Brooks are being sued in their “personal capacity.” The lawsuit seeks unspecified monetary damages and a requirement that the defendants provide written notice seven days in advance of a rally or public event hosted on an election day.

The law was aimed at protecting against conspiracies.

What they’re saying: “The insurrection and coup attempt was really motivated by white supremacist behavior and domestic terrorists. The NAACP thinks it’s important for us to pursue a course of action on behalf of members of Congress,” NAACP president Derrick Johnson told Axios.

“The attempt was to prevent the certification of the election and invalidate African American votes.”

“We must hold (Trump) accountable for the insurrection that he so blatantly planned. Failure to do so will only invite this type of authoritarianism for the anti-democratic forces on the far right that are so intent on destroying our country,” Thompson said in a statement.

Today, I filed a civil claim against Donald Trump, Donald Trump Jr., Rudolph Giuliani, and Rep. Mo Brooks for inciting an attack against the Capitol that terrorized lawmakers and prevented us from certifying the votes of the American people.