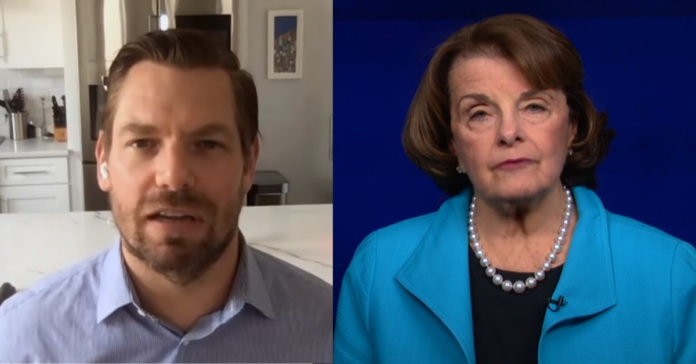 Eric Swalwell is having a bad week. It won’t get better unless he comes clean and gives a full accounting of what in the heck happened with the Chinese spy story.

He claims it is classified and that is simply not good enough. Washington Post columnist Mark Thiessen won’t let him off the hook and wants answers.

He mocked Eric, reminding him of a major skeleton in his close: “Swalwell was one of the most prominent purveyors of the now-disproven conspiracy theory that Donald Trump had colluded with Russian intelligence to steal the 2016 election.”

“Yet it turns out that all the while Swalwell was spreading those lies, he knew that he had been cultivated and funded by a suspected Chinese intelligence operative.”

There is a “certain poetic justice in the news that Rep. Eric Swalwell had a close relationship with an alleged Chinese spy, Christine Fang,” he added.

Swalwell took offense and fired off: “Just a reminder: pay your child support @JasonMillerinDC. Kids shouldn’t go hungry because Dad is a deadbeat. Feed them for the holidays.”

From The Daily Caller:

Rep. Eric Swalwell spoke at an event in 2013 along with a former staffer for Sen. Dianne Feinstein who is alleged to have spied for the Chinese government.

The group that hosted Swalwell and Russell Lowe, the Feinstein staffer, was led by Christine Fang, who herself is alleged to have worked as a Chinese secret agent from 2011 to 2015.

Fang developed close ties to Swalwell, Axios reported this week. She raised money for his political campaigns and planted an intern in his office.

Just a reminder: pay your child support @JasonMillerinDC. Kids shouldn’t go hungry because Dad is a deadbeat. Feed them for the holidays. https://t.co/9FqcTfa1TV