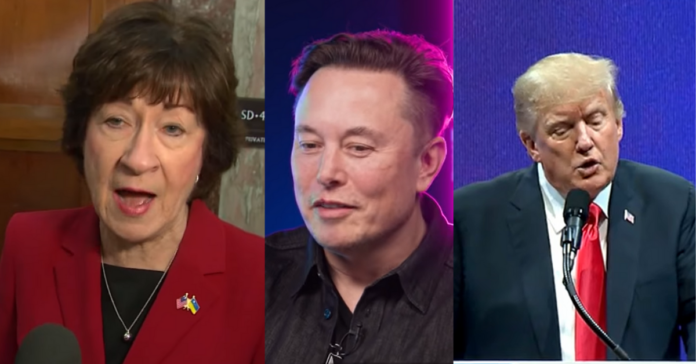 Sen. Susan Collins (R-Maine) is changing her tune, kind of, when it comes to Former President Donald Trump saying in a new interview that Twitter boss Elon Musk should reinstate Trump on the platform.

“Although I obviously don’t agree with a lot of President Trump’s tweets, I do think he should have his account back. To me, it’s ironic that we allow Russian government sites to be on Twitter, but we don’t allow President Trump.”

“If Iranian leaders can be on and the Russians are going to be, I think that President Trump should be,” Sen. Steve Daines (R-Mont.) said. Sen. Thom Tillis (R-N.C.) said: “I’m going to leave that up Elon Musk.

“I’ve had a lot of people just think because he’s purchased Twitter that something bad’s going to happen, but we should point to SpaceX Starlink and Tesla, where he’s figured out how to run reasonably competent companies.”

“Based on what Musk has said, I would think the ex-president would get reinstated, but I don’t have a view on it.”

Trump told Fox News thanks but no thanks and he will not rejoin Twitter.

“I am not going on Twitter, I am going to stay on TRUTH,” Trump said.

“I hope Elon buys Twitter because he’ll make improvements to it and he is a good man, but I am going to be staying on TRUTH.”

“We’re taking in millions of people, and what we’re finding is that the response on TRUTH is much better than being on Twitter.

“Twitter has bots and fake accounts, and we are doing everything we can.

“The bottom line is, no, I am not going back to Twitter.”

“I think it is good. We want liberty and justice and fairness in our country, and the more we can have open, the better,” Trump said of Musk buying Twitter.

“But no, I don’t view that as a competition for what I am doing.”

“But I want everybody to come over to TRUTH—conservatives, liberals, whatever.”

“It became boring because there was no interaction,” Trump said of Twitter. “The interaction on TRUTH has been amazing.”

He said: “We want everybody.”

Elon Musk seemed to respond to the controversy by trolling Twitter by posting a screenshot showing Truth Social at the top of the Apple store.

He captioned it: “Truth Social is currently beating Twitter & TikTok on the Apple Store.”