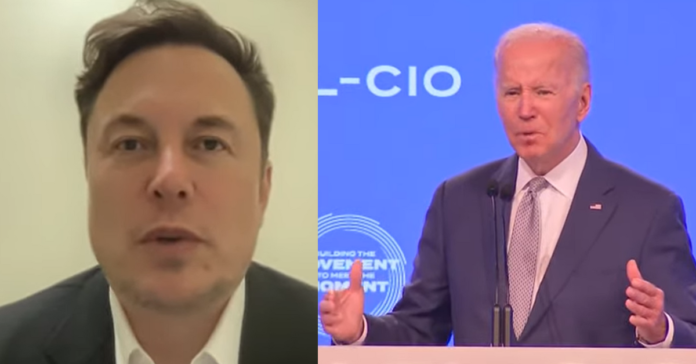 Tesla CEO and billionaire Elon Musk overruled President Joe Biden and said a recession is ‘inevitable’ and it is ‘more likely than not’ that the recession will happen in the ‘near term.’

Joe Biden tried to deny a recession is coming yesterday and used economist Larry Summers to back him up. But Summers has been warning about a recession and said on Monday:

“There are numbers that are remarkably discouraging relative to the Fed Reserve view,” he said.

A reporter asked Biden yesterday: “Economists are saying a recession is even more likely than ever.”

Biden said:  “No, the majority of them aren’t saying that. Come on. Don’t make things up, OK? Now, you’re sounding like a Republican politician. I’m joking. That was a joke.

“But all kidding aside, no I don’t think it is. I was talking to Larry Summers this morning, there’s nothing inevitable about a recession.

“I think we’re gonna be able to get a change in Medicare and a reduction in the cost of insulin.

“We also can move in a direction that we can provide for tax increases on those in the corporate area as well as individuals as it relates to Trump’s tax cuts.”

Larry Summers said on NBC on Sunday that a recession was likely to occur.

“My best guess is that a recession is ahead.

“I base that on the fact that we haven’t had a situation like the present with inflation above 4% and unemployment beyond 4% without a recession following within a year or two.

“And so I think the likelihood is that in order to do what’s necessary to stop inflation the Fed is going to raise interest rates enough that the economy will slip into a recession,” Summers said.

Biden: "My mother had an expression: out of everything lousy, something good will happen. We have a chance to make a fundamental turn toward renewable energy, electric vehicles, and across the board." pic.twitter.com/Si4oJ7ROFg