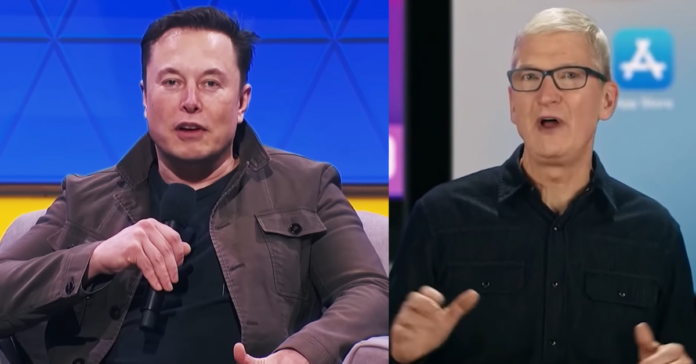 Twitter CEO Elon Musk dropped a bombshell on his social media platform saying that ‘Apple has threatened to withhold Twitter from its App Store, but won’t tell us why.”

Musk added: “Secret suppression of free speech by Apple. Customers were never told. What the hell is going on here? Apple has mostly stopped advertising on Twitter. Do they hate free speech in America? What’s going on here @tim_cook?

“Did you know Apple puts a secret 30%  tax on everything you buy through their App Store? Musk took a poll on Twitter asking: “Apple should publish all censorship actions it has taken that affect its customers?” 86% of voters so far said yes Apple need to come clean.

But it gets worse. A Twitter user said: “During Covid, Apple demanded our apps filter some search terms from being returned. If we did not filter the terms, our apps would not be allowed in the store. Apple may make good products, but they have been opposed to free speech for some time.”

Musk asked his followers: “Who else has Apple censored?”

“Is this really a fight we want to pick.

“An awful lot of your Tesla customers use iOS to access their cars.

“If that app gets pulled, it’ll significantly impact your ability to sell to Apple customers.

Musk fired back with:

“Are you suggesting Apple would use its duopolist powers to hurt Tesla?”

Musk asked the first poster about what they claimed Apple censored, “What terms?”

“Apple disallowed almost anything related to Covid, especially vaccines or human origins of the virus.

“We had to build a list of over 20 terms to not show results for, only on Apple devices.

Apple has also threatened to withhold Twitter from its App Store, but won’t tell us why

Secret suppression of free speech by Apple. Customers were never told. What the hell is going on here?