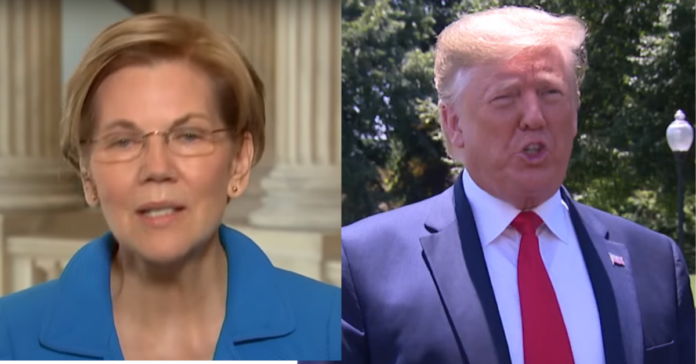 When in doubt, bet against the Democrats. Their ability to implode was legendary, but after the last two weeks, they have reached a new status.

If there was a Rushmore for incompetence, they would be all over it. AOC basically called Pelosi a racist today, only to walk it back.

The presidential candidates talk of reparations and fight a school busing argument 40 years old to a perplexed and confused nation.

But Elizabeth Warren just beat them all – believe me she has a realistic shot to be the nominee to take on Trump – with a new pledge to decriminalize illegal border crossing into the US.

Look, we have a crisis at the border and this would just make it worse…can you imagine? if she is the nominee she just doomed herself.

Sen. Elizabeth Warren on Thursday unveiled her plan to overhaul the nation’s immigration system, pledging to reverse a series of Trump administration policies and authorize her Justice Department to review allegations of abuse against detained migrants.

The proposal would decriminalize crossing the border into the United States without authorization and separate law enforcement from immigration enforcement, a plan first proposed by fellow 2020 candidate Julián Castro that Warren endorsed. Warren writes in her summary of the plan that, if elected, she would first seek to pursue her agenda through legislation, but “move forward with executive action if Congress refuses to act.”

The Massachusetts senator rolled out her plan in a Medium post hours before addressing LULAC, a Latino civil rights organization, in Milwaukee, Wisconsin, and weeks after a public visit to a detention facility in Homestead, Florida, that is holding unaccompanied migrant children. She met there with local activists protesting the facility, waved to children from atop a stepstool that gave her a distant view inside, and denounced the practice of contracting out detention centers.

“We must address the humanitarian mess at the border and reverse this president’s discriminatory policies. But that won’t be nearly enough to fix our immigration system,” Warren wrote in the Medium post. “We need real reform that provides cost-effective security at our borders, addresses the root causes of migration, and provides a path to status and citizenship so that our neighbors don’t have to live in fear.”

“(I’ll focus) their efforts on homeland security efforts like screening cargo, identifying counterfeit goods, and preventing smuggling and trafficking,” she wrote in the post. “And to change the culture, I’ll insist on transparency and strengthen the authorities of independent internal watchdogs to prevent future abuses.”

“We need big, structural change: a fair immigration system that preserves our security, grows our economy, and reflects our values,” she wrote at the end of the proposal. “That’s good for immigrants, good for workers, and ultimately good for the United States.”