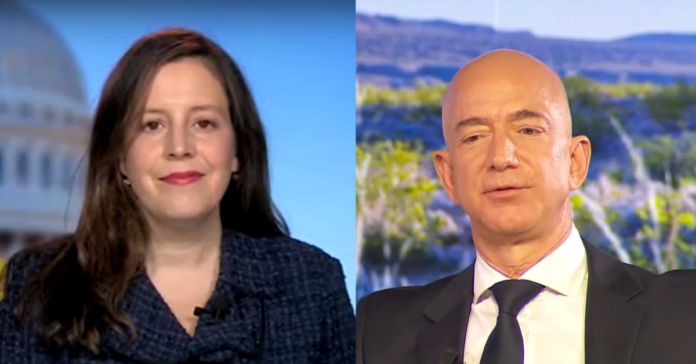 House Republican Elise Stefanik of New York shut down billionaire Jeff Bezos after the Amazon founder tried to go after Elon Musk for buying Twitter hinting that China may have leverage over Musk.

Bezos of course flooded America with cheap goods from China, made billions in the process, and left, but left consumers frustrated by subpar goods with zippers that do;t work and knock-off counterfeit goods. Also, Bezos owns the Washington Post so if anyone should not be taking shots at Musk it is this guy.

He said on Twitter: “Interesting question. Did the Chinese government just gain a bit of leverage over the town square?” Enter Elise Stefanik who said:

“How rich from @JeffBezos the Baron of the @washingtonpost – the paper that happily cashes checks from the Chinese Communist Party for advertisement to spew Leftist propaganda.”

How rich from @JeffBezos the Baron of the @washingtonpost – the paper that happily cashes checks from the Chinese Communist Party for advertisement to spew Leftist propaganda https://t.co/OTI4Noh8PA

“My own answer to this question is probably not.

“The more likely outcome in this regard is complexity in China for Tesla, rather than censorship at Twitter.

“But we’ll see. Musk is extremely good at navigating this kind of complexity.”

Twitter, Inc. (NYSE: TWTR) announced yesterday it has entered into an agreement to be acquired by an entity wholly owned by Elon Musk, for $54.20 per share in cash in a transaction valued at approximately $44 billion. Upon completion of the transaction, Twitter will become a privately held company.

Bret Taylor, Twitter’s Independent Board Chair, said, “The Twitter Board conducted a thoughtful and comprehensive process to assess Elon’s proposal with a deliberate focus on value, certainty, and financing. The proposed transaction will deliver a substantial cash premium, and we believe it is the best path forward for Twitter’s stockholders.”

Parag Agrawal, Twitter’s CEO, said, “Twitter has a purpose and relevance that impacts the entire world. Deeply proud of our teams and inspired by the work that has never been more important.”

“Free speech is the bedrock of a functioning democracy, and Twitter is the digital town square where matters vital to the future of humanity are debated.

“I also want to make Twitter better than ever by enhancing the product with new features, making the algorithms open source to increase trust, defeating the spam bots, and authenticating all humans.

“Twitter has tremendous potential – I look forward to working with the company and the community of users to unlock it.”

Interesting question. Did the Chinese government just gain a bit of leverage over the town square? https://t.co/jTiEnabP6T

Agree — this is a fascinating piece — no one drawn as a cartoon. Thanks for the link and reco. https://t.co/92rd4a1g6o