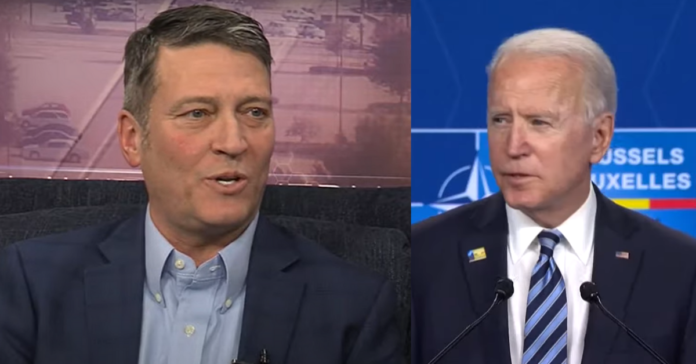 Dr. Ronny Jackson, a former White House physician, just made a huge move and publicly called on President Biden to take a cognitive test so the commander-in-chief can prove to the American public he is of sound mind.

The freshman Texas congressman and 13 of his GOP colleagues signed the letter sent to Biden expressing “concern” citing several examples of potential memory lapses including botching the name of his Defense Secretary, telling an Amtrak story with a timeline that made no sense, and seeming to blank on the famous first line of the Declaration of Independence.

“Unfortunately, your mental decline and forgetfulness have become more apparent over the past 18 months,” Jackson and the GOP reps wrote in a letter to Biden, the White House physician, and Dr. Anthony Fauci.

Jackson issued a statement that read:

Today, Congressman Ronny Jackson (TX-13) sent a letter to President Joe Biden, Physician to the President Kevin O’Connor, D.O. and Chief Medical Advisor Anthony Fauci, M.D. calling on President Biden to immediately undergo a cognitive test and share the results with the American people. His letter comes after a clear decline of Biden’s cognitive ability, including embarrassing performances on the world stage.

Jackson said: “The American people deserve to have absolute confidence in their President. They deserve to know that he or she can perform the duties demanded of the office, and they deserve to have full transparency on the mental state of their highest elected leader.

“I would argue that the American people don’t have that confidence in President Biden. When I was Physician to President Donald J. Trump, the liberal media relentlessly pushed a narrative that he needed a cognitive test and that it should be the standard for anyone serving as Commander-in-Chief and Head of State.

“I administered the Montreal Cognitive Assessment (MOCA) test and President Trump excelled. Given the precedent set and Biden’s clear mental impairment, I believe it is past time he undergo a cognitive test.”

The full letter can be found here.

Given the precedent set and President Biden’s CLEAR mental struggles, I believe it’s past time he take a cognitive test.

I sent a letter to him saying just that! ⬇️https://t.co/6RCKj7pFYd