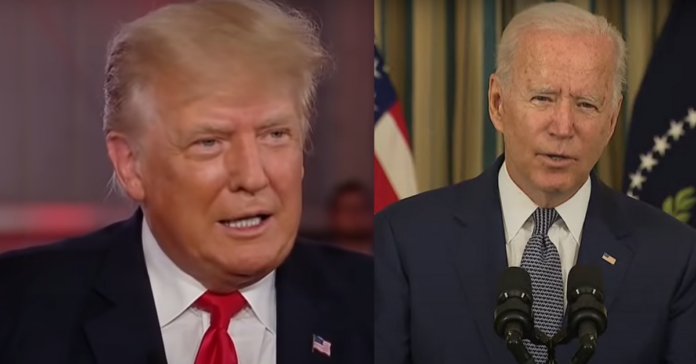 Former President Donald Trump put current President Joe Biden on notice while promoting an upcoming appearance he will make at an Evander Holyfield fight. Trump and his son Don Jr. will provide commentary on the fight on a special pay-per-view telecast.

He was promoting the fight when Biden’s nake came up and he said: “Well, if I had to pick somebody in the world, not only a professional boxer because I’d take a pass on the professional boxers — that can be a very dangerous subject.

“If you said if I had to box somebody, I think probably my easiest fight would be Joe Biden because I think he’d go down very quickly.

“He’d be in big trouble if he ever did.

“I think Biden would go down within the first few seconds.

“I love great fighters and great fights,” Trump said, confirming his role at the event in a statement sent to Insider earlier this week.

“I look forward to seeing both this Saturday night and sharing my thoughts ringside. You won’t want to miss this special event.

“I have been close to Evander during some incredible times during incredible wins,” he said.

“The guy was just a fantastic person. I don’t even know if he can hear me now, I hope he can, but Evander had tremendous heart.”

Trump was asked who he would pick if he had to choose someone to box.

He said he would pick Joe Biden and that he would "go down within the first few seconds." 😂 pic.twitter.com/WbPzY7c556