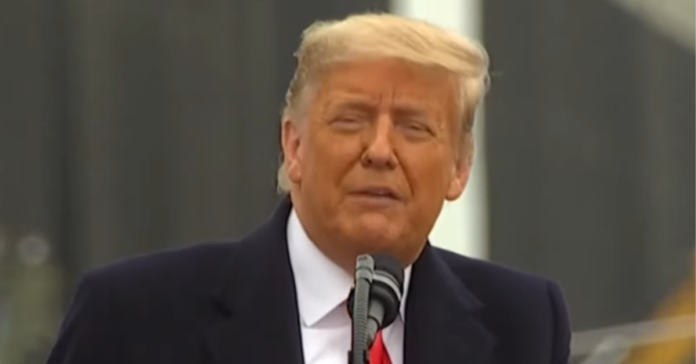 Former President Donald Trump dropped a huge hint on his intentions for the fast-approaching 2024 presidential race. He put both political parties on notice with his statements but let them know he will keep them all guessing for as long as he wants.

Trump did not say he will definitely run in 2024 and he did not rule it out instead he simply terrified the establishment with a few words: “We have tremendous support.”

Look, Trump can be an absolute kingmaker if he wants and not just with the GOP – if you watch closely over the next four years (if the Dems are smart so they may not do it) Biden and Pelosi will try to win back Trump supporters who switched sides when the Dems sold out to Wall Street.

Historically these voters aligned with the Dems policies and disdained the GOP’s for being too close to Wall Street.

But when the Dems and the GOP abandoned these voters Trump stepped in (Obama used the same message by the way so it had nothing to do with race) and spoke to them and the numbers do not lie.

The Dems will try to get some of these voters back (by passing Trump’s infrastructure plan) and if the GOP falls asleep it may work.

That is where Trump comes in – Trump will do what is right for the people, not the GOP so if the GOP tries to block policies he supported expect Trump to gain support on both sides of the aisle by dragging GOP holdouts over the line to do what is right for the country. In short, Trump is in a very powerful position – he will be able to hold both sides to account, with credibility, and without getting his hands dirty, so expect to see his support grow, not shrink, over the next four years.

In short, Trump has the perfect platform and message for a future candidate or a future media mogul.

“I’m looking at poll numbers that are through the roof. I’m the only guy that gets impeached and my numbers go up,” he continued. “Figure that one out.”

Trump also talked about the crowd that gathered in Palm Beach to show support for him on Presidents’ Day.

“It grew out of nothing, and it was thousands and thousands of people,” he said. “There’s tremendous love and tremendous spirit in this country.”

“The whole MAGA movement, call it MAGA, call it whatever you want, call it America First as opposed to America last,” he said.

“They don’t hit, if he spent the same time hitting Schumer and Biden, they would be much better off.”