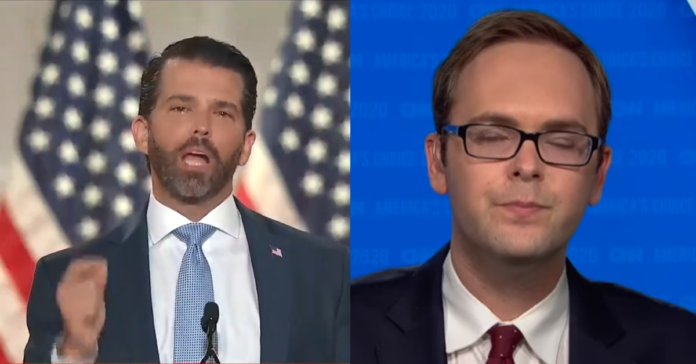 Don Trump Jr. has had enough with CNN and is talking off the kid gloves and is publicly exposing their blatant hypocrisy.

The Atlantic ran a piece about what the media ‘resisters’ would do when Trump left and Joe Biden came into office.

They go through all the publicity and social media followers these reporter’s gained fighting Trump tooth and nail to say nothing of all the books they sold.

Trump helped half the DC press corps buy second homes during the last four years so it is valid to ask them what they will do with Biden.

Not surprisingly they plan to go easy on Joe and Don Trump Jr let them have it. He said:

“CNN “fact checker” admitting that he’s pivoting from fact checking Biden to focusing on “online disinformation,” AKA CNN code for Republicans who use the internet + “congressional leaders” which will almost undoubtedly = congressional Republicans in practice.”

He added, “So predictable.”

Acosta, who emerged as a hero of the anti-Trump “resistance” for his combative style of questioning members of the administration, is perhaps the most famous example of someone who benefited from covering Trump.

Coppins noted critics who have accused him of “showboating” with such antics as walking out of a press conference after then–Press Secretary Sarah Huckabee Sanders refused to say reporters weren’t enemies of the people.

“But he insists that his on-air indignation has always been genuine,” Coppins wrote before Acosta admitted he wouldn’t cover Biden with as much ferocity.

“You can’t just go and trash the press and totally lie to the American people and tell them real news is fake news … I don’t think the press should be trying to whip up the Biden presidency and turn it into must-see TV in a contrived way,” Acosta told Coppins.

Coppins admitted it sounded like a “double standard,” but Acosta maintained that Trump’s treatment of the press was a “nonstop national emergency” that warranted harsh coverage.

“If being at the White House is not an experience that might merit hazard pay … then perhaps it is going to be approached differently,” Acosta told Coppins.

“It will not be a 24-hour, seven-day-a-week job to fact-check Biden,” Dale told Coppins, who noted that the CNN fact-checker feels Biden doesn’t lie as often as Trump so his role will largely shift to “debunking online disinformation and digging into claims made by congressional leaders.”

CNN “fact checker” admitting that he’s pivoting from fact checking Biden to focusing on “online disinformation,” AKA CNN code for Republicans who use the internet + "congressional leaders" which will almost undoubtedly = congressional Republicans in practice.