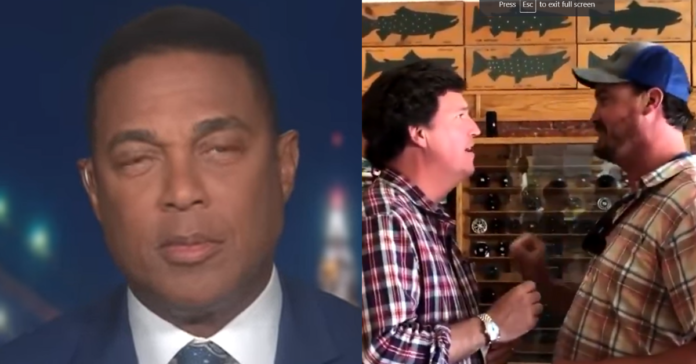 CNN anchor Don Lemon stunned his audience when he defended Tucker Carlson from the Montana goon who accosted Tucker when he was with his daughter at a fishing store. “I never thought I’d be in the position to maybe somehow have to defend Tucker Carlson,” Lemon said before showing the video of the incident.

In the video you can see below, the goon gets in Tucker’s face and calls him “the worst human known to man.” Tucker shot back “my daughter’s here,” before silencing the goon by calling him ‘son’ and walking away. “Let me tell you this, I don’t like it,” Lemon said. “I don’t like it when people do that because I would not want it to happen to me.”

“But I have mixed emotions because Tucker has done this to people before. I think that what Tucker says much of the time is completely reprehensible and divorced from reality,” Lemon said, “but he has a right to be in a space and not be accosted and not be ambushed by anyone.”

“Ambushing Tucker Carlson while he is in a store with his family is totally inexcusable,” it read. “No public figure should be accosted regardless of their political persuasion or beliefs simply due to the intolerance of another point of view.”

The store distanced itself from the goon in a statement. “On July 23, a well-known television personality, Tucker Carlson, was affronted while shopping at Dan Bailey’s Outdoor Company,” the company said.

“Coincidentally, the person engaging Mr. Carlson was a local resident named Dan Bailey. This person has no affiliation with our business, other than share the same name as our founder, who passed away in 1982. To be clear, we treat every customer equally and respectfully. Our staff was professional and cordial to Mr. Carlson, as we are with all of our customers.”

Fox News has condemned an incident during which a man confronted Tucker Carlson at a Montana fly-fishing store over the weekend and told the prime-time host he was the “worst human being known to man.”

“Ambushing Tucker Carlson while he is in a store with his family is totally inexcusable,” Fox said about the now-viral incident in a statement. “No public figure should be accosted regardless of their political persuasion or beliefs simply due to the intolerance of another point of view.”

The man, Dan Bailey, posted a video of himself confronting the Fox News host at the store in Montana, getting in his face and saying to him “you are the worst human being known to mankind. I want you to know that.”

“I appreciate that,” Carlson responds before looking into the camera being held by another person recording the confrontation and giving a smile.

The Fox host then walks away, with the man briefly following him.

“@donlemon” surprisingly sides with Tucker Carlson regarding the confrontation he experienced while in Montana. @ananavarro doesn’t believe Montana Man was aggressive, (me either),while Don thinks differently. A portion of Ana’s opinion on the matter. Ana makes a valid point. pic.twitter.com/cSMirOtuGi

Montana man to @TuckerCarlson: “You are the worst human being known to mankind. I want you to know that.”

Tucker Carlson was with his daughter at a fishing shop in Montana when this unhinged leftist began harassing him. https://t.co/KDYDZ6ekKy

If you think accosting a public figure while they’re shopping for fishing gear with their family on vacation is somehow accomplishing something or changing anyone’s hearts or minds – you’re a hypocrite and have totally lost the plot.