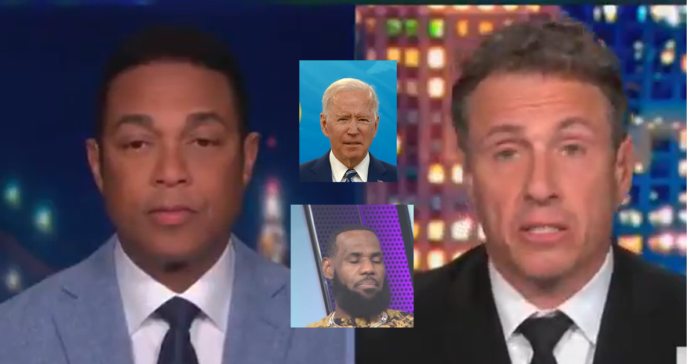 Don Lemon and  Chris Cuomo went on CNN and shamed the outrage mob who rushed to judge a police officer involved in the shooting of a young girl with a knife. Sadly, the outrage mob included influential people like LeBron James and Joe Biden who spoke first and thought second.

“People are anguished watching another video like this, and I get it. But even in our anguish, we cannot abandon the responsibility we have to be fair,” Lemon said,

“And even while our hearts are hurting, we have to judge each incident based on what we see and the facts we know.

“They roll up on the scene. They see people tussling around. Someone has a knife, and their job is to protect and serve every life on that scene.

“If they see someone who is in the process of taking a life, what is that decision, what decision do they have to make?

“The other person’s life was in imminent danger.

“As you know, from the hostile environment training that we get on this job, and because of our proximity to law enforcement, that at a certain distance, a stabbing, a knife, can be much more lethal than a bullet.

“Especially if you get stabbed in the artery in the temple, somewhere that you’re going to bleed out.”

Cuomo asked why the parents didn’t step in, “What were they doing? Why didn’t he stop it? Why did the police have to come and control that situation?”

“A duty to use force to protect his own life or the life of another,” Cuomo said about the cop later.

He then noted how fast everything happened and how quickly the officer had to make a decision.

He said LeBron was irresponsible for sending out a tweet without getting all the facts, “And in this instance, ‘you’re next’ could certainly be interpreted by some, even, as a call for violence. I think it was a grossly irresponsible message for LeBron James to send out.”

“By any measure, it was a volatile situation,” the senator said. “The woman who was killed was wielding a knife, was violent, appeared to be threatening the [lives] of others. It may well be, on an investigation, that this police officer saved the life of a potential victim of a knife attack and we shouldn’t jump to conclusions.”

“The facts should be determined, but the left doesn’t care about the facts, they care about demonizing and attacking law enforcement and I think it’s wrong,” he said.

"Their job is to protect and serve every life on that scene. If they see someone who is in the process of taking a life…what decision do they have to make?"

CNN's Chris Cuomo and Don Lemon were surprisingly reasonable tonight when discussing the Columbus police shooting.
"They roll up on the scene, they see people tussling around. Someone has a knife. And their job is to protect and serve," Lemon said. pic.twitter.com/2jRsBf49Sp

Finally, Cuomo and Lemon were in agreement: the officer "has a duty."
"A duty to use force to protect his own life or the life of another," Cuomo said. pic.twitter.com/lp7DAX1y1H

Sunny says Don Lemon is wrong in the case of Ma'Khia Bryan.