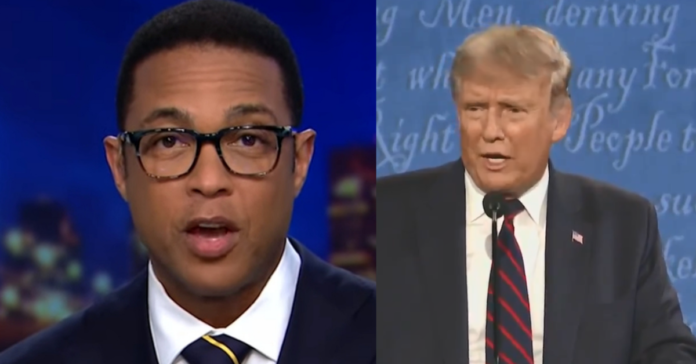 CNN’s Don Lemon crossed the line last night when he launched a new round of insults at President Trump in his smarmy way.

He, on live TV, actually suggested that President Trump appeared to be on drugs during the debate last night.

“I felt like I was watching a kid whose doctor had prescribed him too much Adderall,” Lemon said as he made a mocking sniffing sound for effect.

“Yeah,” CNN host Chris Cuomo chimed in. “You can’t just reach in the medicine cabinet… and hope it works.”

Lemon then doubled-down, “Am I wrong?”

“That’s how I feel because he was overly aggressive, it’s like he was hopped up on, I don’t know what was going on,” Lemon said.

“I wish I could see it that way, because I think a lot of people share your observation,” Cuomo said shooting him down.

“This is the only guy I know.”

Lemon and Cuomo, who took over CNN’s debate night coverage at 1 a.m. ET, spent much of their program attacking the president for his actions during the debate. Lemon’s comments about Adderall and being “hopped up” came after Trump repeatedly suggested Democratic presidential nominee Joe Biden should have to take a drug test before the event.

In a tweet on Sunday, Trump questioned Biden’s previous debate performances and claimed there was a disturbingly erratic pattern in the former vice president’s performance. He added that he would be willing to take a drug test as well.

“I will be strongly demanding a Drug Test of Sleepy Joe Biden prior to, or after, the Debate on Tuesday night,” Trump wrote. “Naturally, I will agree to take one also. His Debate performances have been record setting UNEVEN, to put it mildly. Only drugs could have caused this discrepancy???”

Biden’s deputy campaign manager Kate Bedingfield responded to Trump’s comments, disparaging the president and accusing him of trying to deflect from the coronavirus pandemic.

“Vice President Biden intends to deliver his debate answers in words. If the president thinks his best case is made in urine he can have at it,” she wrote. “We’d expect nothing less from Donald Trump, who pissed away the chance to protect the lives of 200K Americans when he didn’t make a plan to stop COVID-19.”