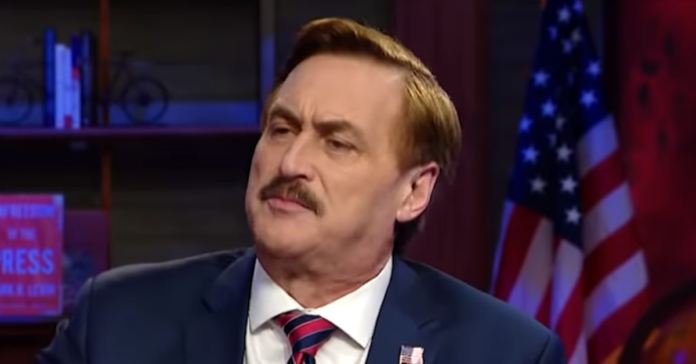 “Lindell’s statements were calculated to—and did in fact—provoke outrage and cause Dominion enormous harm,” says the lawsuit. A defiant Mike Lindell told CNBC: “I’m very happy that they finally got that suit filed. My message to Dominion is thank you for finally getting this done because it’ll be back in the limelight now.

Lindell added, “They also say that I benefited, or that my I used this for MyPillow, to advertise, and that’s not true. I lost 22 retailers,” Lindell said. “It’s been cancel culture for MyPillow.”

From The Wall Street Journal: One of the largest makers of voting machines in the U.S. on Monday sued a prominent supporter of former President Donald Trump, alleging that the businessman had defamed the company with false accusations that it had rigged the 2020 election for Joe Biden.

Dominion Voting Systems sued Mike Lindell, chief executive of Minnesota-based MyPillow Inc., and his company in the U.S. District Court for the District of Columbia, seeking more than $1.3 billion in damages.

In its complaint, the company cites a number of statements made by Mr. Lindell, including in media appearances, social-media posts, and a two-hour film claiming to prove widespread election fraud. Mr. Lindell said he helped produce the film, which he released online in early February.

The complaint alleges that Mr. Lindell made false claims about the integrity of Dominion’s voting machines and that he knew no credible evidence supported his claims that the company had stolen the election from Mr. Trump—what Dominion has called the “Big Lie.”

“He is well aware of the independent audits and paper ballot recounts conclusively disproving the Big Lie,” the complaint states. “But Lindell…sells the lie to this day because the lie sells pillows.”

The big picture: Lindell is the latest Trump ally to face a multibillion-dollar lawsuit from Dominion or Smartmatic, another voting machine company subjected to a campaign of false claims about the election.

Pro-Trump lawyers Sidney Powell and Rudy Giuliani have each been sued by Dominion for $1.3 billion in damages.

Earlier this month, Smartmatic sued Powell, Giuliani, Fox News and some of the network’s top hosts for $2.7 billion.

Lindell, who received a cease-and-desist letter from Dominion in January, told Axios at the time: “I want Dominion to put up their lawsuit because we have 100% evidence that China and other countries used their machines to steal the election.”

"Lindell—a talented salesman and former professional card counter—sells the lie to this day because the lie sells pillows."

Quite an opening to the Dominion defamation suit: pic.twitter.com/q1s2CqoNNQ