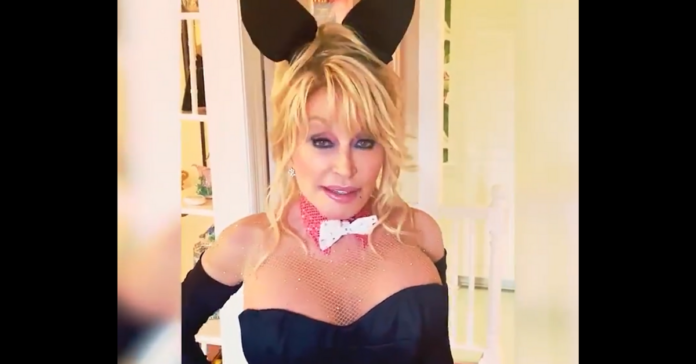 Legendary country music singer Dolly Parton went viral for dressing up as a Playboy Bunny for her husband Carl Thomas Dean’s birthday. She also recreated her famous 1978 shoot for the magazine.

Dolly posted the video on Twitter and the response was instant. Since being posted late Tuesday afternoon, Dolly’s video has been viewed a staggering 7.2 million times. It has been retweeted more than 47,000 times. And it received more than 275,000 likes. You can see the video below. Dolly is 75 years young.

“Today is July 20. It’s my husband Carl’s birthday and you’re probably wondering why I’m dressed like this,” the singer said in a video posted on social media.

“Remember some time back I said I was going to pose for Playboy magazine when I was 75? Well, I’m 75 and they don’t have a magazine anymore but my husband always loved the original cover of Playboy, so I was trying to think of something to do to make him happy. He still thinks I’m a hot chick after 57 years — and I’m not going to try to talk him out of that.”

“I did a little photoshoot in this little outfit and I had a cover made of the new Dolly. The first one, remember this?”

“I was kind of a little butterball in that one. Well, I’m string cheese now. But he’ll probably think I’m cream cheese. I hope.”

“You think Playboy ought to pay me for at least a photoshoot? I do.”

“I just might do it. If I can do it in good taste and they Playboy want it, we’ll do it along with a really good interview inside.”

I love you Dolly! Here’s a painting I did of you from that iconic cover! Hope you like it 😍👍 Happy Birthday to your hubby! pic.twitter.com/ohs1MFygnb

My favorite bit of trivia is that Keanu Reeves’ mother, a costume designer, designed Dolly’s Playboy Bunny costume. Also, he wore it for one Halloween while in high school. He talks about it in the video starting at the 1:35 mark. https://t.co/IWd9A8FHDh