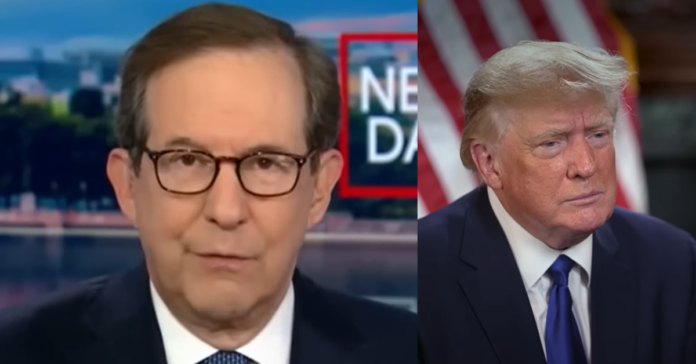 “That’s had implications for journalism because he had a very calculated plan to color the media as partisan players. And so anytime you or anyone else, reports facts that he finds inconvenient, he fits it into that paradigm, it seems like that’s played havoc in some ways with the news media and how it covers politics.”

Wallace said: “I think was in February of 2017, so it was really only a month after he was in office, that he sent out the first tweet that said, ‘ABC, NBC, the Times, the Post are not just my enemy, they’re the enemy of the state.’

“Which is Stalin-esque language and really chilling.

On the #AxeFiles, Chris Wallace–host of @CNN's new Who's Talking to Chris Wallace–discusses the challenges objective journalists would face in covering a Trump '24.
"He did some bad things. That's not an opinion but fact and you have to report it."
Pod👉https://t.co/Kepw9uhN4w pic.twitter.com/P4orNCexgE

“And you know, again, this is a guy who had just won the election who had tens of millions of supporters and still does.

“So, you know, if he said, ‘They’re not my enemy, they’re your enemy. They’re the enemy of America.’ “That has a big impact in terms of our acceptance and credibility.

“The other, which to me is more interesting is what it did to the media and what I think it did is it pushed some people, some of our colleagues over the line that I think people pushed back in a very unfortunate way.

“And you know, he in effect suckered them into becoming antagonists on the field when what we should have been doing.

“And I tried to do, is, you know, not play into that, you know, stay in our position.

“We’re not for Trump.

“We’re not against Trump.

“We’re just gonna, you know, play it straight and cover the news.

“But I think that some people fell into a kind of a trap he set in becoming, antagonistic oppositional, and to a certain degree, I think kind of fulfilled that tweet that he sent,” he said.

Chris Wallace Criticizes Media for Falling Into Trump’s ‘Trap’: He ‘Suckered Them Into Becoming Antagonists On The Field’ https://t.co/zSIXxkkkrH #SmartNews