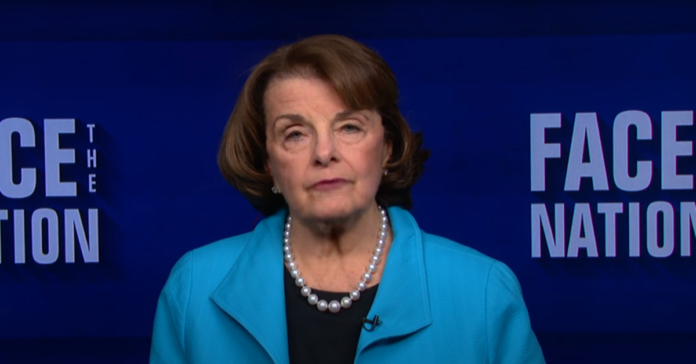 Sen. Dianne Feinstein just suffered a setback in the halls of Congress and many believe it has everything to do with the goons on the left who ripped her for the sin of being nice to Lindsey Graham and Amy Coney Barrett.

Dianne even hugged Lindsey after Amy’s hearings guaranteed she would be confirmed. The left erupted at the sight of bipartisanship and wanted Dianne nowhere near the leadership of the Dem Party.

Chuck Schumer even confirmed that he had a long talk with her after the incident in a menacing way. “I’ve had a long and serious talk with Sen. Feinstein and that’s all I’ll say about it right now,” he said at the time.

Now Dianne just announced, no doubt under pressure from the left, that will not pursue leadership of the key Senate Judiciary Committee.

Or any other committee next year which is a dramatic shift – no one in DC gives up power willingly, it has to be taken from you, and it appears that happened here.

“California is a huge state confronting two existential threats – wildfire and drought – that are only getting worse with climate change. In the next Congress, I plan to increase my attention on those two crucial issues,” Feinstein said in a statement.

“I also believe that defeating COVID-19, combating climate change and protecting access to healthcare are critical national priorities that require even more concentration.”

Feinstein, the top Democrat on the Senate Judiciary Committee, called the hearings “one of the best set of hearings that I’ve participated in” and at one point credited Barrett for her testimony, undercutting Democrats’ attempts to portray the hearings as “illegitimate” and a “sham” being rushed by Republicans on the eve of the upcoming presidential election. Feinstein also praised Sen. Lindsey Graham (R-S.C.), the chairman of the committee, for his leadership throughout the process.

Several progressive groups, including abortion rights group NARAL Pro-Choice America and judicial advocacy group Demand Justice, called for Feinstein to be replaced as the top Democrat on the committee.

“Amy Barrett and this power grab pose a grave threat to every freedom and right we hold dear and tears the very fabric of our democracy. Americans ― whose lives hang in the balance ― deserve leadership that underscores how unprecedented, shameful and wrong this process is,” NARAL President Ilyse Hogue said in a statement on Friday.

Another prominent California Democrat who has been mentioned as a possible Senate candidate, Rep. Katie Porter, also said she disagreed with Feinstein’s assessment of the Barrett hearings.

“I disagree strongly with Sen. Feinstein that that set of hearings was one of the best or was even acceptable,” Porter said in an interview with HuffPost last week. “I think Amy Coney Barrett did not answer basic questions about her beliefs and stonewalled repeatedly. We got many fewer direct answers than we have out of most Supreme Court hearings.”

Feinstein declined to answer questions about her conversation with Schumer and the criticism from progressives on Tuesday.

“Thank you very much,” the senator told HuffPost before walking into an elevator.

"Senator Dianne Feinstein (D-Calif.) today announced she will not seek the position of chairman or ranking member of the Senate Judiciary Committee in the 117th Congress."