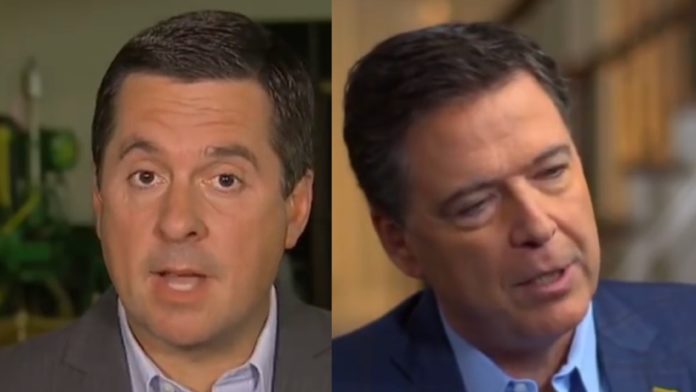 James Comey is set to testify tomorrow and the transcripts will be released soon thereafter. They will be explosive no doubt, and hopefully, the answers America seeks will be found.

Devin Nunes for one is not waiting around and has discovered some email skeletons in James Comey’s closet and if corroborated, and we will know tomorrow if they are, they spell doom for the deep state.

From The Hill: Just before Thanksgiving, House Republicans amended the list of documents they’d like President Trump to declassify in the Russia investigation. With little fanfare or explanation, the lawmakers, led by House Intelligence Committee Chairman Devin Nunes (R-Calif.), added a string of emails between the FBI and the Department of Justice (DOJ) to their wish list.

Sources tell me the targeted documents may provide the most damning evidence to date of potential abuses of the Foreign Intelligence Surveillance Act (FISA), evidence that has been kept from the majority of members of Congress for more than two years.

The email exchanges included then-FBI Director James Comey, key FBI investigators in the Russia probe and lawyers in the DOJ’s national security division, and they occurred in early to mid-October, before the FBI successfully secured a FISA warrant to spy on Trump campaign adviser Carter Page.

The email exchanges show the FBI was aware — before it secured the now-infamous warrant — that there were intelligence community concerns about the reliability of the main evidence used to support it: the Christopher Steele dossier.

The exchanges also indicate FBI officials were aware that Steele, the former MI6 British intelligence operative then working as a confidential human source for the bureau, had contacts with news media reporters before the FISA warrant was secured.

The FBI fired Steele on Nov. 1, 2016 — two weeks after securing the warrant — on the grounds that he had unauthorized contacts with the news media.

But the FBI withheld from the American public and Congress, until months later, that Steele had been paid to find his dirt on Trump by a firm doing political opposition research for the Democratic Party and for Democratic presidential candidate Hillary Clinton, and that Steele himself harbored hatred for Trump.

If the FBI knew of his media contacts and the concerns about the reliability of his dossier before seeking the warrant, it would constitute a serious breach of FISA regulations and the trust that the FISA court places in the FBI.

That’s because the FBI has an obligation to certify to the court before it approves FISA warrants that its evidence is verified, and to alert the judges to any flaws in its evidence or information that suggest the target might be innocent.

From The Gateway Pundit: This is significant because the FBI has maintained for the last two years that they fired Christopher Steele after they obtained the FISA warrant after finding out he violated FBI protocol by speaking to the media.

The FBI used Michael Isikoff’s Yahoo News article as a source to corroborate the Steele dossier when presenting evidence to the FISC. If they knew Steele was Isikoff’s source, the FBI is guilty of circular intelligence reporting which of course is against protocol. They presented the two sources as independent which means they defrauded the FISC.

Comey will appear for a closed-door interview this Friday and lawmakers will be grilling him on this new document which has strongest evidence to date of FISA abuses.

FBI email chain may provide most damning evidence of FISA abuses yet. @RealDonaldTrump should release the whole lot. https://t.co/3WmHS4zm1S