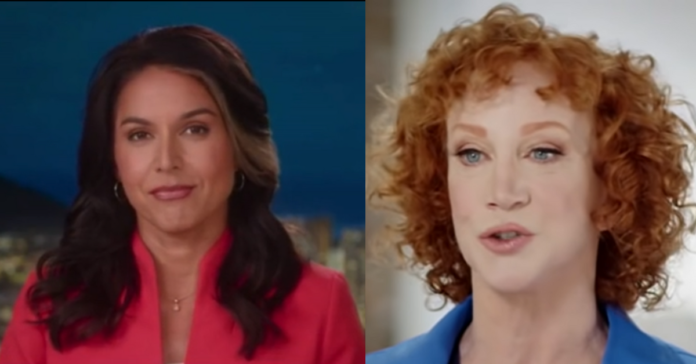 Ex-Dem. Rep. Tulsi Gabbard, a Lieutenant Colonel who served in the Iraq War and is currently a Major in the U.S. Army Reserve, slammed the Dem Party and Hollywood stars like Kathy Griffin for their radical rhetoric.

Speaking on Jesse Watters Primetime Gabbard said: “I feel sick right now seeing you play these different clips. You know, I, like so many of my fellow service members, I enlisted because of those Jihadist attacks on 9/11 to support and defend our Constitution, to protect our fellow Americans and to go after and kill those who attacked us on that day.

“This just shows how far they are willing to go, targeting our fellow Americans as worse than Al-Qaeda terrorists, all to hold onto their power.

“That’s all they care about.

“Whether you’re talking about the Biden administration, these talking heads on TV, U.S. senators, the Department of Homeland Security, the people who are some of the most powerful people in our country, who have the strings of the national security apparatus at their fingertips, targeting our fellow Americans, just because they didn’t vote for Joe Biden, all because they need, they want to hold on to power.

“This is outrageous and should be concerning to every single American.

“And we’ve got to see right through what they’re doing.

“The timing of this is not an accident.

“We are just weeks away from the midterm elections.

“They are concerned that they will lose the seats that they have.

“And so they’re, again, not caring about the consequences and the destruction to the country and the heart of the American people, willing to foment this fear to say, ‘Hey, don’t you dare vote for these Republicans, because they voted for Trump, and they are traitors and they’re a greater threat to our country than Al Qaeda jihadists,” she said.

The Dem Party has been actively supporting and funding the same GOP candidates they call a threat to Democracy proving their words hollow and Gabbard correct.

But someone forgot to tell reliable dupe Kathy Griffin who said earlier:

“If you don’t want a Civil War, vote for Democrats in November. If you do want Civil War, vote Republican.” She was immediately called out by reporter Kristina Wong who said: “This sounds like a threat.”

Kathy then tried to blame ‘maga blue checks’ for her comments.

“You guys. The maga blue checks are at it again.

“Because they are constantly threatening Civil War, they are now trying to suggest that I am the one who is threatening a Civil War.

“Because you know, that’s my thing.”

You guys. The maga blue checks are at it again. Because they are constantly threatening Civil War, they are now trying to suggest that I am the one who is threatening a Civil War. Because you know, that’s my thing. 🙄 https://t.co/bugd1SP1cr