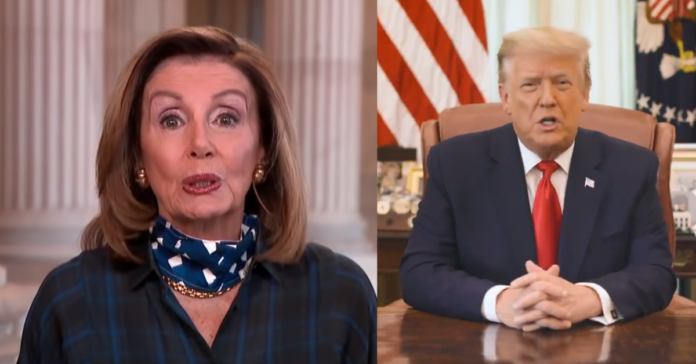 The Democrats are pondering the unthinkable and have issued hints they may try to impeach President Trump again.

NBC News is reporting that the House could start the second round of impeachment hearings if President Donald Trump fires FBI Director Christopher Wray.

There is no law against impeaching two or three times and there is no chance the Senate would vote for Trump’s removal although a few more than Romney may cross the aisle if it happened again.

The lawyers told Trump that canning Wray could make it seem like Trump required officials to pass a loyalty test, according to NBC News sources.

It’s not surprising that the president’s lawyers appear concerned. Trump continues to commit the misdeeds for which he was impeached.

Trump was impeached for abusing the powers and privileges of his office for his personal self-enrichment and for subverting national interests in favor of his own personal interests.

Specifically, Trump implied that he might withhold American aid to Ukraine — a vulnerable ally — if Ukraine didn’t open an investigation into the son of Trump’s political rival, Joe Biden.

Such an investigation would, of course, potentially benefit his own re-election and harm the election prospects of his political opponent.

Testimony established that Trump’s implied threat was understood by both U.S. and Ukrainian officials.

Testimony at the impeachment hearing established that Ukrainian President Volodymyr Zelenskiy understood that if he didn’t open the investigation Trump wanted, his country risked losing its American aid.

And Zelenskiy was right to be concerned. Those who fail to do Trump’s bidding often incur his wrath.

To take one recent example, Trump demanded that the governor of Georgia, Brian Kemp, and its secretary of state, Brad Raffensperger, both Republicans, invalidate Georgia’s presidential election results.

Trump then attacked both so viciously that election officials in Georgia found themselves on the receiving end of death threats from irate Trump supporters.