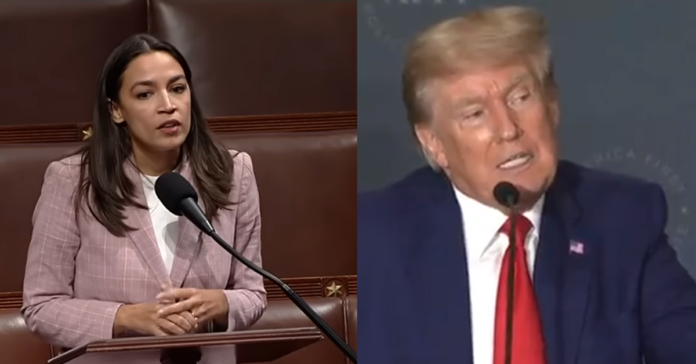 Some Dems are calling for Dem Rep Alexandria Ocasio-Cortez to run for president because they think she has the ‘best shot’ against former President Donald Trump in 2024.

AOC has not been shy about criticizing President Joe Biden or supporting primary challengers for establishment Dems, and with the Dem bench so weak that Kamala Harris and Pete Buttegueg are the front-runners to beat back Biden, an AOC candidacy is always a possibility.

Michael Starr Hopkins wrote: “When Barack Obama came out of nowhere to win his Senate seat in 2004, it almost felt preordained. As if he was the person we had been waiting for to breathe fresh air into the Democratic Party.

“Flash forward to 2018, and the meteoric rise of a 29-year-old bartender from Queens feels eerily similar. She has been unafraid, unapologetic and unwilling to bend to the will of Washington. She is a force to be reckoned with, and in 2024 Democrats are going to need her force to reckon with Republicans.

“Rep. Alexandria Ocasio-Cortez (D-N.Y.) is less of a personality and more of a movement. Yes, the smart, photogenic congresswoman is the face of the rising progressive movement, but she is also the future of the Democratic Party. AOC has cultivated a following beyond politics. She’s an influencer in its purest form. Her ability to relate to her supporters and allow them a glimpse into her private life is a blueprint for Democrats trying to act less like mannequins and more like humans.

“She’s the voice of a movement that began after the banks were bailed out by the government, while homeowners were left to default. The simplicity with which she talks about everyday struggles hints that she’s not just a persona for consumption. She isn’t beholden to corporations, is a prodigious small-dollar fundraiser, and could out-Trump Trump like no other politician has been able to.

“If Sen. Bernie Sanders (I-Vt.) is the Godfather, Ocasio-Cartez is Michael Corleone.

“Bernie passing the torch to AOC and recruiting her to run for president would be bold and would strengthen and solidify her base of supporters before she even gets out of the gate.

“AOC wields a superpower that is rarely found in Washington: She isn’t afraid to lose. Her 2018 victory wasn’t just historic, it was shocking, and felt predestined — much like when we first saw a brilliant speaker with a funny name and big ears remind us that through hope and change we could put our country on a new course.

“A new CNN poll finds that 75 percent of Democratic and Democratic-leaning voters want the party to nominate someone other than President Biden in 2024.

“Should President Biden announce that he will not seek a second term, AOC would represent the bridge that he hoped to create.

“Much like Barack Obama talked about his student loan debt, AOC can uniquely talk about the struggles of a forgotten generation waiting for someone to speak up for them.

“If Jan. 6 was a dry run for what we’ll see in 2024, we need an inspirational and generational candidate to fight back. Democrats need AOC to meet this historic moment.

“I don’t necessarily agree with everything the congresswoman believes, that’s called healthy dialogue. But what I believe is that when no one is looking, she’d do what’s right for the country, not what’s right for her bank account.

“There is no denying that AOC would boost GOP turnout as a result of coverage on right wing networks built to scare elderly white voters.

“But she would electrify the party’s base, turn out the youth at record levels and bring the party together by acknowledging the threat posed by electing Trump Republicans.

“In the age of social media and quick sound bites, no Democrat is more prepared to embarrass a bully like Donald Trump or Florida governor Ron DeSantis and return some chutzpah to the Democratic Party.

“There will be no going high when they go low anymore.

“It appears the only rule is there are no rules, and AOC is ready to enter the cage and fight for our democracy.

“If anyone is prepared to unify the Democratic Party and put the focus back on the working class, it’s AOC.

“Republicans laugh, Democrats fawn, but if voters trust her, we could finally be looking at the first woman president.

“It’s not just Democrats that need Ocasio-Cortez to electrify a nation and ensure Trump or DeSantis doesn’t find his way into the White House.

“We all need a leader who knows the price of gas, can tell you the cost of milk and still remembers trying to figure out how she could keep the lights on.

“There will never be another Barack Obama, but I have a feeling we’ll be saying the same about AOC,” Hopkins wrote.