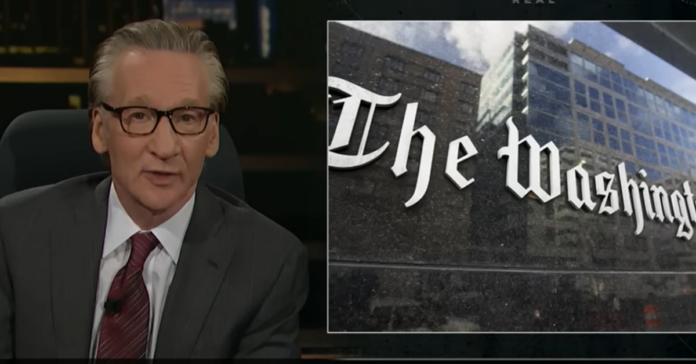 Hollywood star Bill Maher issued a warning to the Washington Post after the paper of a record became a national laughingstock when some employees threw a public temper tantrum that lasted for days. Bill said:

“If you missed it, the Washington Post recently got embroiled in a self-inflicted sh*storm when one of their best reporters David Weigel retweeted, not tweeted, retweeted this joke: ‘Every girl is bi. You just have to figure out if it’s polar or sexual.’

“The comedian who actually wrote the tweet called it a banal, throwaway joke, which is exactly what it is- throw away, as if you don’t like it, throw it away. (See Video Below)

“Of course, the leadership at the Post folded like a Miami condo and suspended Weigel without pay for a month and denounce the offending retweet is a ‘gross violation of their values.’ –  free Speech apparently not being one of them.

“For days, Sonmez raged with the fire of a thousand burning bras, sending a gazillion tweets calling for more to be done against Weigel, mocking her bosses attacking colleagues and letting the world know how much the Washington Post sucked.

“And this endless bickering and infighting continued online in public view until the bell rang and they all went to seventh period.

“The New York Times just read an op-ed entitled, ‘Why are we still governed by baby boomers?’ This is why.

“Because too many millennials are overly sensitive, overly fragile and have no sense of priorities. You know, I’m sure many boomers would love to retire, but they can’t.

“They’re like the grandmother who would much rather be watching Judge Judy and has to raise her grandkids because her own kids are too f—ed up to manage it.

“It’s funny, you think my generation is an eyeroll?

“Let me let you in on a little secret about the younger generations;

“No one wants to hire you.

“Your sense of entitlement is legendary and, with notable exceptions, your attention span and worth ethic suck.

“This Washington Post story had such resonance because it’s behavior we all recognize.

“There is a war going on within the millennial generation. I know because I’m friends with the good ones. “But the crybabies, unfortunately, are still winning.

“They complain they haven’t taken over yet?

“We’ll stop complaining because in many ways you already have.

“The fact that the Post’s initial response was to punish not Felicia but one of their best reporters for a silly joke shows that the kindergarten is already in charge.

“All this time blubber-tweeting over a retweet begs the question don’t you have anything better to do?

“Aren’t you supposed to be reporters digging up stuff? Are there no more vital issues going on in America right now?

“This is why you’re not in charge.

“Because if someone named Deep Throat called the paper today and wanted to meet in a parking garage, this crew of emotional hemophiliacs would have an anxiety attack and report it to HR that they didn’t feel safe.

“If there is a silver lining to this story, it’s that eventually, the Post did fire Felicia Sonmez, so maybe there is a line that’s just too much nonsense, but that generation needs to move that line much closer to sanity and find it much sooner because democracy dies in dumbness.”