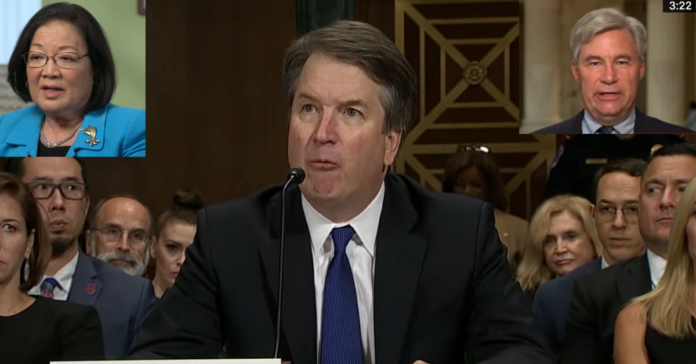 Dem Senators just gave up the game and are targeting Brett Kavanaugh and leaders of the FBI who they claim misled them during the ugly confirmation hearings. As Kavanaugh is on the bench for life this nonsense will come back to haunt them.

“The Bureau also confirmed that tips from the tip line were instead provided to the Trump White House Counsel’s office, where their fate is unknown.

“The admissions in your letter corroborate and explain numerous credible accounts by individuals and firms that they had contacted the FBI with information ‘highly relevant to . . . allegations’ of sexual misconduct by Justice Kavanaugh, only to be ignored,” the senators write in their letter sent today. “If the FBI was not authorized to or did not follow up on any of the tips that it received from the tip line, it is difficult to understand the point of having a tip line at all.”

“Whitehouse and Coons initially raised the lackluster supplemental background investigation in a Senate Judiciary Committee hearing with Director Wray in July 2019. Whitehouse observed during the hearing the clear lack of process through which the public or members of Congress could relay information to the FBI after the troubling allegations against Kavanaugh made headlines nationwide.

“Coons likewise pressed Wray for a clear procedure. As both senators noted, the only conduit for information potentially relevant to the allegations was a “tip line,” the product of which was apparently never pursued by the Bureau. During the hearing, Wray echoed Republican claims that the FBI conducted the investigation “by the book,” while asserting that supplemental background investigations are less rigorous than criminal and counterintelligence investigations.

“On August 1, 2019, Coons and Whitehouse wrote to Wray asking for a complete picture of how the FBI handled the supplemental background investigation of Kavanaugh.

“They asked why the FBI failed to contact witnesses whose names were provided to the FBI as possessing “highly relevant” information; how involved the Trump White House was in narrowing the scope of the investigation; whether the FBI had used a tip line in previous background investigations to manage incoming allegations and information regarding a nominee; and more.

“Nearly two years later and after repeated follow-up requests, the FBI finally responded to Whitehouse and Coons’s questions. The June 30, 2021 letter from the FBI Office of Congressional Affairs revealed new information on the Kavanaugh investigation: that Justice Kavanaugh’s nomination “was the first time that the FBI set-up a tip line for a nominee undergoing Senate confirmation,” and that tip line received “over 4,500 tips, including phone calls and electronic submissions.”

“The FBI apparently pursued none of these tips. Instead, by the FBI’s own account, it merely “provided all relevant tips” to Trump’s Office of White House Counsel, the very office that had constrained and directed the limited investigation.

“Whitehouse, Coons, Durbin, Leahy, Blumenthal, Hirono, and Booker call on the FBI to answer a range of outstanding questions surrounding the Bureau’s use of the tip line and the relevant information it yielded.

“The senators press the Bureau for any records and communications related to the tip line investigation, including “all relevant tips” described in Wray’s letter that the FBI “provided . . . to the Office of White House Counsel,” the statement said.

This long-delayed answer confirms how badly we were spun by Director Wray and the FBI in the Kavanaugh background investigation and hearing.https://t.co/x24NcE3KtC

No wonder so many witnesses were so frustrated when they tried to bring evidence forward. I’ve heard tales that even FBI agents not in on the scam sent info to the “tip line.” That must feel like a burn.