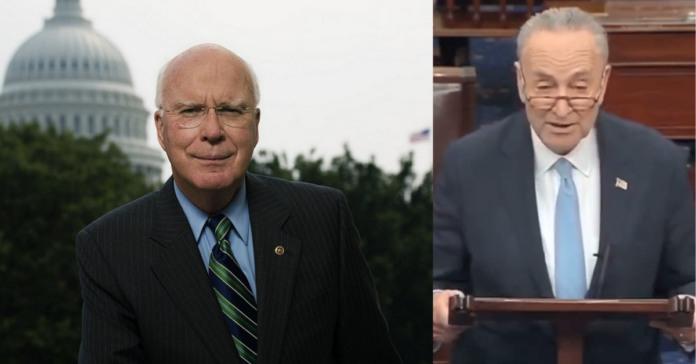 Sen. Patrick Leahy, the Vermont Democrat who will preside over Trump’s impeachment trial, was taken to a Washington hospital tonight for evaluation.

“This evening, Senator Leahy was in his Capitol office and was not feeling well,” his spokesman David Carle said. “He was examined in the Capitol by the Attending Physician.”

“Out of an abundance of caution, the Attending Physician recommended that he be taken to a local hospital for observation, where he is now, and where he is being evaluated,” Carle added.

Vermont Republican Gov. Phil Scott would pick an interim replacement if Leahy cannot continue in his role but a special election will be held in six months to pick someone to finish the term.

Leahy, 80, is the president pro tempore of the Senate, which makes him responsible for presiding over that chamber in the absence of Vice President Kamala Harris.

Leahy’s status in the Senate also puts him third in line in the order of presidential succession, after Harris and House of Representatives Speaker Nancy Pelosi, D-Calif.

The House impeached Trump earlier this month for inciting the riot by his supporters at the Capitol complex on Jan. 6. Thousands of members of a mob invaded the halls of Congress, smashing windows and rifling through offices.

According to Vermont law:

(a) If a vacancy occurs in the office of U.S. Senator or U.S. Representative, the Governor shall call a special election to fill the vacancy. His or her proclamation shall specify a day for the special election and a day for a special primary, pursuant to section 2352 of this title.

The Governor may make an interim appointment to fill a vacancy in the office of U.S. Senator, pending the filling of the vacancy by special election. (Added 1977, No. 269 (Adj. Sess.), § 1.)

Senator Patrick Leahy, who was set to preside over the impeachment trial, is in hospital. pic.twitter.com/LP708I28cq