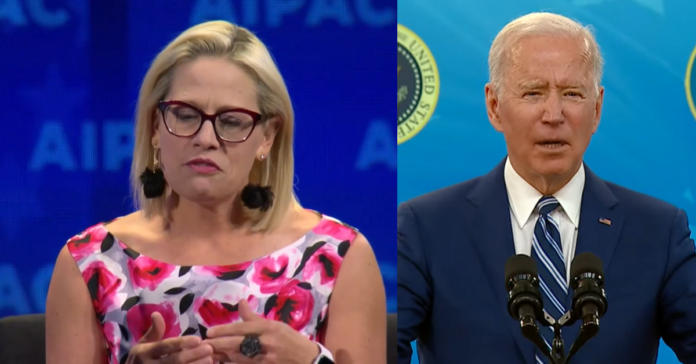 A key Dem Senator is putting Joe Biden and Kamala Harris on notice over the ongoing crisis at the border. Arizona Democrat Sen. Kyrsten Sinema just joined Texas GOP Sen. John Cornyn to introduce a bipartisan attempt to solve the crisis with or without the Biden admin’s help.

“It is critical that our nation take aggressive steps to secure our border, protect our communities and ensure migrants are treated fairly and humanely,” Cornyn and Sinema wrote.

“We pledge to work with our Congressional colleagues to develop bipartisan and commonsense responses to the surge of migrants at the border, and hope to collaborate with you, Department of Homeland Security (DHS) Secretary Alejandro Mayorkas and the rest of your Administration to tackle this challenge,” they wrote.

Sinema also broke the hearts of liberals and a few Biden administration officials when she backed  Arizona Governor Doug Ducey’s decision to send the National Guard to the southern border to help with the crisis.

Arizona’s Democratic Sens. Kyrsten Sinema and Mark Kelly are both backing the governor’s decision to deploy the National Guard to the southern border in response to the surge in migrants that has overwhelmed authorities.

“I welcome the Governor’s action to provide logistical support to Arizona communities, and look forward to hearing more details about how the National Guard will assist,” Sinema said in a statement.

“I will continue working closely with Arizona leaders and organizations to support our border communities, secure the border, prevent the spread of COVID-19, and treat all migrants and unaccompanied children fairly and humanely.”

Republican Gov. Doug Ducey on Tuesday announced that he is deploying the state’s National Guard to the border and issuing an emergency declaration in response to the growing migrant crisis.

“It’s just as bad, if not worse, than the coverage we’ve been seeing,” Ducey said in a statement.

The U.S. border patrol is overwhelmed, local law enforcement and mayors are calling out for help. Citizens in our border communities are concerned for their safety and non-profits left to pick up the pieces of broken federal policies are strained.”

The Guard will be involved with installing and maintaining border cameras, collecting data, analyzing imagery for trends in border crossings, and helping with operations at detention centers, Ducey’s office said.

There is a crisis at our southern border. The administration must help address it by reimbursing Arizona for the National Guard helping with border security efforts. https://t.co/30f1MP7BtZ

We’re working across the aisle to secure our border, protect our communities, and ensure migrants are treated fairly and humanely. https://t.co/4MJl4pqIHr