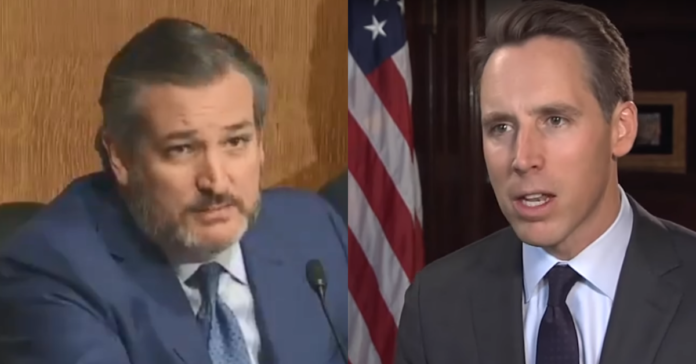 He blames them for playing a role in the riots by making a bogus challenge to the election for political reasons – Trump lost 61 court cases including at the Supreme Court trying to overturn the election so everyone knows there was no fraud – and now wants them on the no-fly list.

“There’s no exemption for being put on the no-fly list,” Thompson said during a Serious XM interview yesterday.

“Even a member of Congress that commits a crime, you know, they expel from the body.”

“There are ethics charges that can be brought against those individuals,” he said.

“And people are looking at all this.”

“What Sen. Josh Hawley did and what Sen. Ted Cruz did was horrible.”

Thompson had previously called on the “crazy folk” involved in the riot at the U.S. Capitol to be labeled domestic terrorists and to also be added to the no-fly list.

When faced with criticism from one Twitter user who said that Thompson “should be ashamed” for saying that Cruz and Hawley should be on the no-fly list, Thompson responded, “I am not ashamed. However, they should be.”

Thompson also revealed in the interview that the Congressional Black Caucus will hold a hearing Wednesday to begin a CBC investigation into what took place at the Capitol which will be independent of the other committee investigations.

He said they are doing this because, “We believe that that double standard existed on the 6th of January. We want to know why so that- obviously we do know why.

You throw the full face and power of the government on them to suppress them. It oughta be one policy.”

I am not ashamed. However, they should be. https://t.co/yvqkgfzcpy