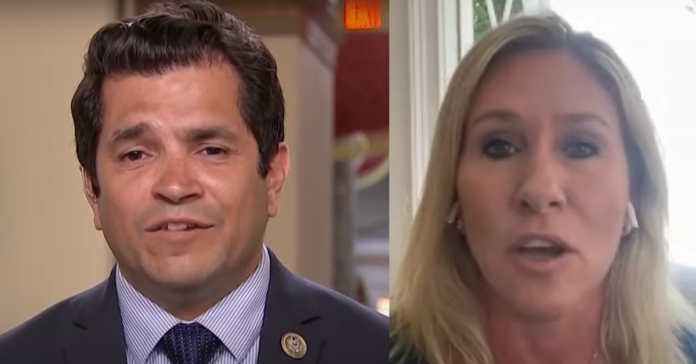 Dem Rep. Jimmy Gomez made a big move and announced that he will introduce a resolution to expel freshman GOP Rep. Marjorie Taylor Greene from Congress. The resolution would require the support of two-thirds of the members of the House to pass and no one believes he has the votes.

Gomez is accusing Greene of supporting calls for “political violence” and advocating “extremism and sedition.”

“Such advocacy for extremism and sedition not only demands her immediate expulsion from Congress, but it also merits strong and clear condemnation from all of her Republican colleagues, including House Minority Leader Kevin McCarthy and Senate Minority Leader Mitch McConnell,” Gomez said.

“As if it weren’t enough to amplify conspiracy theories that the September 11 attacks were an inside job and the mass shooting at Marjory Stoneman Douglas High School was staged, a string of recent media reports has now confirmed that Congresswoman Marjorie Taylor Greene had previously supported social media posts calling for political violence against the Speaker of the House, members of Congress, and former President Barack Obama,” Gomez, D-Calif., said.

He added: “Such advocacy for extremism and sedition not only demands her immediate expulsion from Congress, but it also merits strong and clear condemnation from all of her Republican colleagues, including House Minority Leader Kevin McCarthy and Senate Minority Leader Mitch McConnell.”

“Democrats and their spokesmen in the Fake News Media will stop at nothing to defeat conservative Republicans,” Greene, R-Ga., said in response to the Gomez’s announcement.

Greene was first known during her run for Congress as a supporter of the online conspiracy theory QAnon, which she later distanced herself from in an interview with Fox News in August.

She’s since earned a reputation as a bomb-thrower in Congress.

She’s refused on various occasions to wear a mask, supported false allegations of widespread election fraud which resulted in her temporarily losing access to her Twitter account and most recently announced that she was filing articles of impeachment against President Biden.

What’s happening: The latest round of Greene comments, pulled from archives of her Facebook page, show the congresswoman promoting an outlandish, QAnon-adjacent conspiracy theory about Hillary Clinton cutting off and donning the face of a child.

That comment was reported by the progressive group Media Matters for America, which previously noted her endorsements of claims that 9/11 was perpetrated by the American government, and that the Parkland school shooting was staged.

What they’re saying: Mark Bednar, a spokesperson for McCarthy, told Axios he is aware of the comments and will discuss them with Greene.

“These comments are deeply disturbing and Leader McCarthy plans to have a conversation with the Congresswoman about them,” Bednar said in an emailed statement.