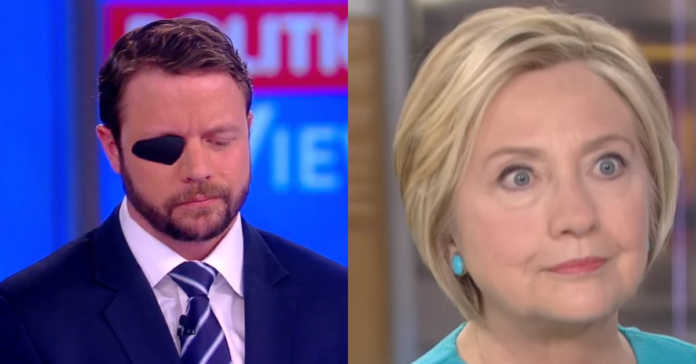 Dan Crenshaw just put Hillary Clinton squarely in her place and boy does she deserve it. Look, Hillary, you lost, it is time to go away.

No one cares on your hot take of the topic of the day.  Especially when your comments are ridiculous. From The Washington Examiner:

Rep. Dan Crewshaw accused Hillary Clinton of “gaslighting” the GOP for blaming the humanitarian crisis on the southern border on Republicans.

“What insane gaslighting. You know Dems have refused to support funding for resources at the border & have offered no solutions,” Crenshaw said in a Sunday tweet.

“So tell us, if you were President, how would you manage hundreds of thousands of people illegally crossing our border and dragging children with them?”

“After blatantly lying, you’re also fundraising for ‘rights of immigrants’ using ActBlue, the Democratic Party fundraising platform, so that donor data is collected for the Democrats. Absolutely shameless,” Crewshaw said.

The Texas congressman’s comments were in response to Clinton demanding accountability from Republicans for conditions at the border.

“Two-year-olds in detention. Children forced to take care of other children. Not enough food or water,” the former secretary of state said Friday on Twitter. “Demand accountability from your Republican representatives for allowing this administration to cage children and keep them in unconscionable conditions.”

Clinton then tried using border condition to fundraising for ActBlue.

“There are amazing groups at the border and beyond doing critical work to defend the rights of immigrant and refugee children. If you can, please chip in to support a few of them today,” she said on Twitter.

After blatantly lying, you’re also fundraising for “rights of immigrants” using ActBlue, the Democratic Party fundraising platform, so that donor data is collected for the Democrats.