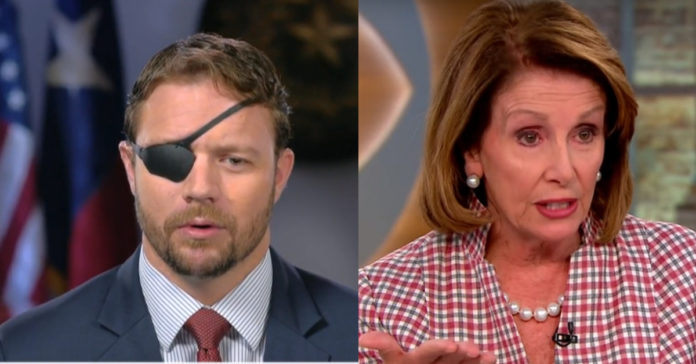 Dan Crenshaw has been feuding with the left and fighting against their identity politics for as long as he can remember.

They have gone after him for spurious reasons too many times to count and always follow the same playbook  – portray their enemies as racist if they disagree with them.

It is a weakness of the left and so rabid have they become they are even attacking Nancy Pelosi now with the same tired playbook.

Enter Dan Crenshaw who said, “Madam Speaker, welcome to the true nature of identity politics – where you’re accused of being racist for no reason at all, and where intellectually lazy insults are used against you as a way to replace substantive debate of your argument or idea.”

AOC, for the sake of the entire Democratic party, would be wise to listen to his words.

From The Hill: Rep. Alexandria Ocasio-Cortez (D-N.Y.) said Thursday that Speaker Nancy Pelosi (D-Calif.) is “absolutely not” racist after accusing her the day before of targeting four women of color in the House for criticism.

“No, no, absolutely not,” Ocasio-Cortez told CNN when asked if she believed Pelosi was racist or motivated by racial animus.

However, the freshman progressive stood by her criticism of Pelosi for dismissing her and fellow Democratic Reps. Ilhan Omar (Minn.), Ayanna Pressley (Mass.) and Rashida Tlaib (Mich.). Ocasio-Cortez had earlier accused Pelosi of “persistent[ly] singling out … newly elected women of color.”