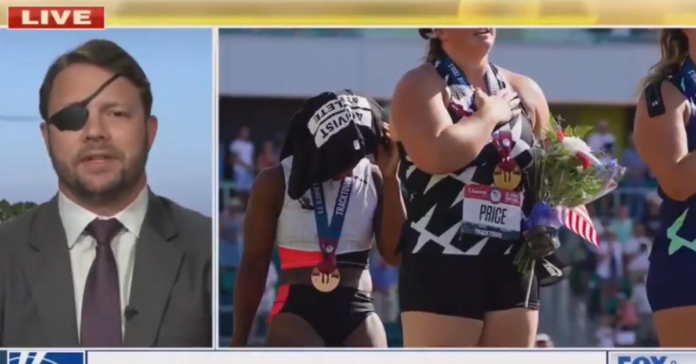 Rep. Dan Crenshaw dropped the hammer on Fox and Friends this morning and called for Gwen Berry to be removed from the U.S. Olympic team after the bronze medal-winning hammer thrower turned her back on the flag during the national anthem in a confusing type of protest at the weekend trials.

Ainsley Earhardt said, “Dan, what was your reaction? You fought for our country to the Olympic hammer thrower, Gwen Berry; she turned her back on the flag during the anthem and put a black t-shirt over her face that said ‘Activist athlete?’”

“We don’t need any more activist athletes,” Crenshaw said. “She should be removed from the team. The entire point of the Olympic team is to represent the United States of America. That’s the entire point, okay?”

Crenshaw continued: “This is one thing when we see NBA players do it, okay fine; we’ll just stop watching, but now the Olympic team? It’s multiple cases of this.

“They should be removed.

“That should be the bare minimum requirement is that you believe in the country representing.

Dan Crenshaw calls for Gwen Berry to be removed from the Olympic team because she turned away from the flag pic.twitter.com/c2xWKLXPPJ

“You can’t see the racism, because it’s subtle, but and if you deny it, it’s because of you teaching people this constantly, and this is what it results in.

“In these displays of hatred towards our own country and it’s got to stop,” Crenshaw said.

Hammer thrower Gwen Berry says that the playing of the national anthem while she was on the podium at the US Olympic track and field trials was “set up.”

Berry turned away from the flag to face the stands while “The Star-Spangled Banner” played during the medal ceremony on Saturday. She then draped a T-shirt bearing the words “activist athlete” over her head.

Having placed third in the hammer event at the trials in Eugene, Oregon, Berry earned a spot on the US team for the Tokyo Olympics, which get underway next month.

“I feel like it was set up. I feel like they did that on purpose, and I was pissed, to be honest,” said Berry of the anthem being played while she was on the podium.

“I was thinking about what should I do. Eventually, I just stayed there and just swayed. I put my shirt over my head. It was real disrespectful. I know they did that on purpose, but it’ll be alright. I see what’s up.”

USA Track and Field (USATF) did not respond to CNN’s requests for comment, but according to Reuters, it said the anthem was played each day at the trials according to a pre-arranged schedule.

“We didn’t wait until the athletes were on the podium for the hammer throw awards,” said USATF spokeswoman Susan Hazzard. “We’re thrilled with the women’s hammer throw team that selected themselves for the Games.”