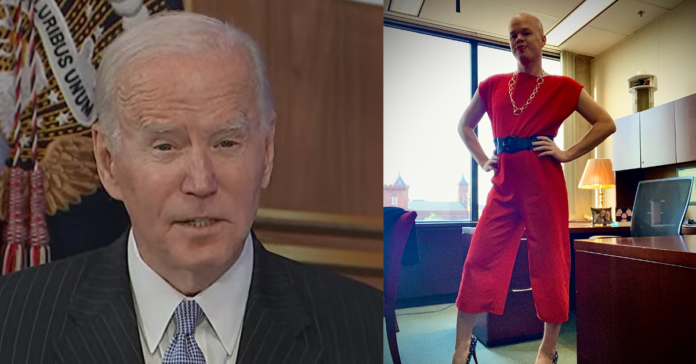 Sam Brinton, the controversial “gender fluid” official who works in the Biden administration at the U.S. The Department of Energy was charged with felony theft last month after allegedly stealing a woman’s luggage at MSP Airport according to media reports.

Brinton allegedly stole women’s luggage worth around $2,000 from the Minneapolis-St. Paul (MSP) International Airport. According to the report, Brinton lied to police numerous times before surveillance footage proved the case. He eventually came clean to the cops.

Brinton is reportedly on leave from the DOE. According to Alphanews: “Law enforcement at the Minneapolis-St. Paul (MSP) International Airport were alerted to a missing suitcase in the baggage claim area on Sept. 16. The adult female victim said she flew into MSP on a Delta flight from New Orleans and went to retrieve her checked bag at carousel seven.

“Airport records confirmed the navy blue Vera Bradley roller bag arrived at 4:40 p.m. but was missing from the carousel.

“So law enforcement reviewed video surveillance footage from the baggage claim area and observed Brinton removing a navy blue roller bag from carousel seven, according to a criminal complaint.

“The complaint says Brinton removed a luggage tag from the bag, placed it into a handbag he was carrying, and “then left the area at a quick pace.” Brinton arrived at MSP Airport around 4:27 p.m. on an American Airlines flight from Washington, D.C., but did not check a bag, meaning he had no reason to visit baggage claim, according to the complaint.”

Brinton said when he joined the Biden admin:

“It’s official. As of June 19th, I now serve my nation as the Deputy Assistant Secretary for Spent Fuel and Waste Disposition in the Office of Nuclear Energy in the Department of Energy.”

From The Department of Energy:

Sam Brinton serves as the Deputy Assistant Secretary of the Office of Spent Fuel and Waste Disposition (NE-8).

In this role, Sam leads NE-8 and oversees its programs including the Office of Spent Fuel and Waste Science and Technology and the Office of Integrated Waste Management. NE-8 manages ongoing research and development related to long-term disposition of spent nuclear fuel and high-level radioactive waste.

Sam brings a wealth of experience to this role, having previously served as the first employee of the country’s first and only nuclear waste management and disposal start-up company, as well as leading one of the first major national consensus reports on the topic of consent-based siting at the Bipartisan Policy Center. Sam has also worked for think tanks such as the Breakthrough Institute, Clean Air Task Force, and Third Way.

Sam is also a well-known advocate for LGBTQ youth and helped to secure protections against the dangerous and discredited practice of conversion therapy in more than half of the country. They identify as gender-fluid and use the pronouns they, them, and theirs.

After nearly a decade of experience in nuclear policy formation and implementation, Sam is excited to bring their knowledge and passion for nuclear waste as a self-proclaimed #NuclearNerd to the Department of Energy.

It’s official. As of June 19th, I now serve my nation as the Deputy Assistant Secretary for Spent Fuel and Waste Disposition in the Office of Nuclear Energy in the Department of Energy. pic.twitter.com/zLq3Bf97X2

You mean there's a downside to Joe Biden putting mentally ill degenerates into positions of power in our government? https://t.co/dcvYA5Ydvz

Sam Brinton on leave of absence from DOE; Petry asked to stay on as acting nuclear waste chief https://t.co/NzntjiCdQ9