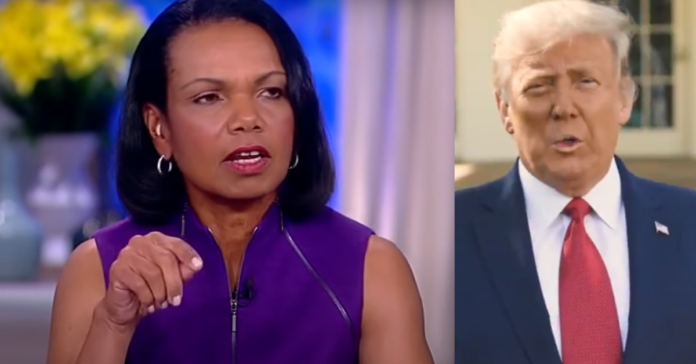 Former Secretary of State Condoleezza Rice broke her silence and praised former President Trump’s political instincts saying he was successful as a politician because of his ability to connect with Americans who ‘felt left out by globalization, who felt diminished by elites.’ Rice appeared on an episode of “The Carlos Watson Show” where she spoke her mind on a number of topics. Below is a partial transcript.

Watson: What did you make of former President Trump? Had you known him well over the years, or did you just get to know him as he became a serious contender for the presidency?

Rice: I had met him a couple of times, but never in the context of politics, obviously. I remember thinking at the time, “Well, this is going to be an interesting experiment.” We’re about to elect somebody whose first job in government is going to be president of the United States, and that was new. In many ways, I thought that a lot of it with him was singular for that reason. He’d never done this, and if I thought about even, for instance, the way that George W. Bush came into office when I came into office with him, he came in with a coterie of people who had worked with him as governor of Texas.

Well, a lot of people said, well, “Donald Trump is bringing all these family members.” Well, it wasn’t as if he had people around him who he had worked with all of these years. I think some of it was singular, but quite apart from the person. What really struck me, and maybe it’s because I’m a political scientist, is that the conditions that produced a populist leader, who had never been in government before, was something I think a lot of us had not paid much attention to, frankly. He touched the nerve of people who felt left out by globalization, who felt diminished by elites. That just assumed that the conversation was the conversation they were having, not the conversation that people who’d been left behind were having.

He touched the hearts of people by saying, “You contribute too, and they’ve forgotten you. They look down on you.” That’s something that we probably still really need to pay attention to. As a political scientist, I guess I was more interested in what produced this in our society. Because somebody said to me, “Well, is it a revolution?” I said, “You know what, a revolution is what happens when you don’t see an evolution coming and when you don’t see a revolution coming.” So this evolution had been going on for some time, but then we had this breakthrough.

Watson: So when you think about someone like former President Trump, contextualize him for me. If you were teaching a class at Stanford, as you head over to Oxford perhaps next year, how will you contextualize? Who will you compare him to either that’s currently around or maybe who comes from history somewhere?

Rice: Well, I think it’s more in the context of people who exist now. Boris Johnson is a little bit this way, and it’s not antidemocratic. People are wrong to say it’s antidemocratic. These are people who go and stand for elected office, but it tends to be, and not anti, but to believe that the institutions are not really the way that you reach people. If you think about the use of Twitter by populists, it goes around the media, it goes around the institutions. It’s a direct appeal to the people, and we’ve seen that before in history. It’s not necessarily antidemocratic, sometimes it is, but most of the time in democracies it’s not.

But it does seek to look to people who feel that the institutions don’t somehow represent them. In this case, there was some evidence that maybe the institutions didn’t. If you want to ask how do you get those people back where they really appeal instead to the institutions? You have to be responsive. That’s how I would teach it, I would teach it as if you remember, the dissatisfaction was not with Republicans or Democrats, it was with the establishment versus the people. If you think about, for instance, the way that Republicans who were interested in “endless wars” were portrayed, or really a singular address when he gave his inaugural address, “America starts now in terms of hearing you.” Well, that’s a really remarkable thing to say.

We would have been more accustomed to hearing, “Well, I want to thank my predecessors for all they’ve done here and here.” It was not singular, it is something that I’ve studied before, but it did say something about where America was. The other thing I’ll say, and I’ve said this before, now there’s a saying that’s attributed to Mark Twain, that Faulkner’s music was better than it sounded. I think some of the Trump policy was better than it sounded. There was an extraordinary ability to get people back to work who had not been working for years. If you look at historic unemployment, low unemployment rates before the pandemic. So we shouldn’t just try to toss this out because . . . he was an unusual personality.

Watson: You are surprising me a little bit because I came here thinking that like 43, your former boss and colleague, President George W. Bush, who said recently that he hadn’t supported 45, Trump, that you weren’t going to be supportive.

Rice: What I want to be is analytical about it. I don’t want to be emotional about it because, look, I have never said who I voted for, who I didn’t vote for. That’s why we have a secret ballot. I did tell people I didn’t vote for President Trump the first time around, everybody knows that.

This is not about support or lack of support for a particular person. This is, as an analyst of politics and political systems, it gets to the edge for me when you are unable to sustain Americans’ belief in their institutions, trust in their institutions. When they are willing to say that those institutions don’t stand for them, then I am worried. I think that that is part of the trend that we saw.

So I think it’s awfully important that we go back and say, “What happened here, and how are we going to reinstitute faith in these institutions?” Now, why did I find January 6th both terrifying on the one hand and affirming on the other?

Yes, and I have said this: It is not appropriate. It was completely appropriate for President Trump to go to the courts about the election and all of that. We did have Bush v. Gore, I’m after all of veteran of Bush v. Gore, which ended up in the Supreme Court.

But it was not appropriate to question, past a certain point, the legitimacy of those elections. What happened on January 6th will always stand as a stain on our democracy. But what happened that night when people, the senators went back into the Capitol and almost in a boring way certified that election. I don’t know if you watched, I’m a political junkie, so I watched the whole thing. I stayed up and watched them through the certification.

I’m thinking to myself it’s almost boring, but it was affirming that after all that Sturm und Drang, the system worked. I have gone around the world telling countries, telling new democracies, if you just get your institutions right, then whatever happens with particular personalities, the institutions will hold, and that’s what we saw. I, frankly, thought that another institutional design that the founders understood, president and vice president are elected separately. So Mike Pence could do his constitutional duty.

Rice: Yes, I do, I know him well, and had known him when he was governor of Indiana because we had a similar interest in school reform and school choice.

Watson: Were you surprised, because he was under a lot of pressure, and while many of us can sit on the sidelines and say what we would do or not do, people probably had some surprise that he ended up where he did. Were you surprised that things played out as they did?

Rice: I wasn’t surprised. This is a man who has integrity and strong values. He and I would be the first to say, “We wouldn’t agree on everything about, particularly, social policy.” But this is somebody of deep integrity, so I wasn’t surprised in the least.