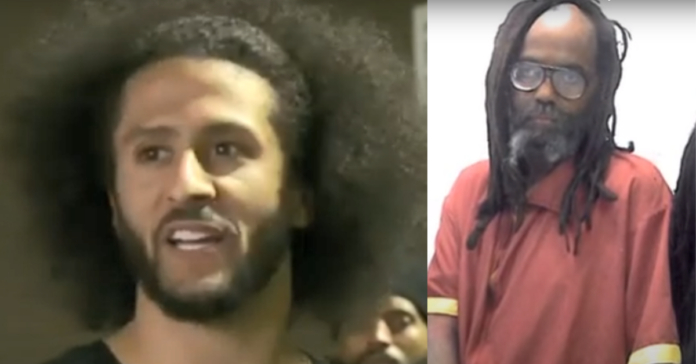 Colin Kaepernick is not happy with the shocking losses the Democrats suffered in the House and Senate due to backlash against ‘defund the police’ and the looting not protesting that happened over the last few months and he is doubling down.

There is nothing more tragic than someone locked up for a crime they didn’t commit but if you are going to demand a cop killer be released you better have good evidence that he is innocent.

“Mumia has been in prison longer than I’ve been alive,” Kaepernick said in the press conference before adding: “Since 1981, Mumia has maintained his innocence. His story has not changed.”

“Mumia was shot, brutalized, arrested, and chained to a hospital bed.”

“We’re in the midst of a movement that says Black Lives Matter, and if that’s truly the case, then it means that Mumia’s life and legacy must matter,” he said.

“And the causes that he sacrificed his life and freedom for must matter as well.”

Abu-Jamal’s case is currently in the Pennsylvania Supreme Court, and his supporters held a press conference Monday, as part of the “Bring Mumia Home” campaign. He was convicted of first-degree murder in 1982, but activists have long been pressing for the overturn of the verdict. Kaepernick, who seems unable to pass up a disgusting movement, is a new booster.

Employed by a radio station, Abu-Jamal was a member of the Black Panthers. During a routine traffic stop in Philadelphia in 1981, Faulkner stopped a vehicle belonging to Abu-Jamal’s younger brother William Cook.

A physical confrontation ensued, and Abu-Jamal, who was nearby at the time, shot Faulkner in the back and in the face, the latter shot while the officer lay bleeding on the ground. Four witnesses testified to this.

Abu-Jamal was also shot in the confrontation and, while recovering in a hospital, admitted he shot the policeman and said he hoped Faulkner would die.