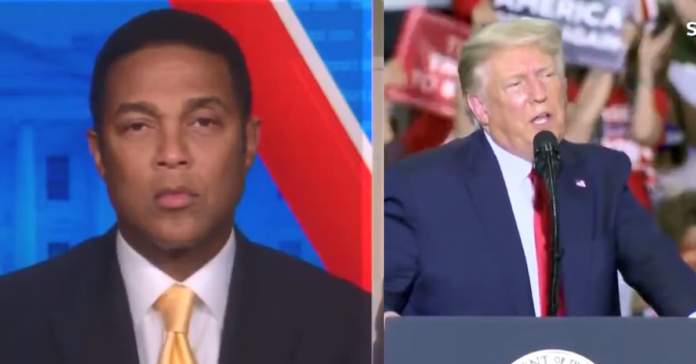 CNN’s Don Lemon is not happy with black male supporters of Trump and actually said on live television they are getting played by Trump’s campaign.

What an incredible thing to say – that these men cannot think for themselves. Look, say what you will about Trump but blindly following the Dems hasn’t led to utopia for many on the left.

Maybe it is time to make the Dems earn the black vote? But that would hurt the media’s business model so they mock the very idea.

“Let’s see how many people actually show up at the polls because I don’t really know any black men who are going to vote for Donald Trump, except for people who have a ton of money in the bank and maybe they think.”

“They think, here’s what they think: Unlike black women, who are the most educated of the voting bloc, who know what it is like to be in a board room or a business meeting and be mansplained when your idea is better, and you’re smarter than the men in the room — I think what these black men think is, ‘Well, if I just get the money and I just get the capital — therefore I will be equal, and I will be treated equally.’

“They’re in for a rude awakening because it doesn’t work that way.

“That’s not how it works, and women know that — especially black women, they know that.

“So, I think these men, honestly, are being bamboozled.”

“They’re being played by the Trump folks.”

Charlamagne Tha God tells Don Lemon "Trump is actually talking to young black male voters, he’s directing ads toward them. They are a group that never get courted." pic.twitter.com/w1Xpi7Za8R

Why so sad @donlemon? https://t.co/60pbBZbZQp