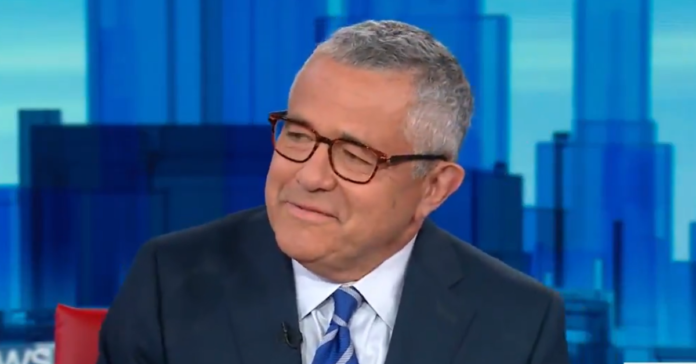 CNN let pervy legal analyst Jeffrey Toobin back on the air for the first time since October with plans to let him have his old job back. Toobin exposed himself during a company zoom call and was fired from his gig at The New Yorker and yanked off the air at CNN until today. “I feel like we should address what’s happened in the months since we’ve seen you, to quote Jay Leno, what the hell were you thinking?” CNN’s Alisyn Camerota asked Toobin.

“Well, obviously I wasn’t thinking very well or very much, and it was something that was inexplicable to me,” Toobin said, before adding, “I didn’t think other people could see me. Now, that is not a defense. This was deeply moronic and indefensible, but that is part of the story.

“And I’m sorry to the people who read my work and who watched me on CNN who thought I was a better person than this. And so, you know, I got a lot to rebuild, but I feel very privileged and very lucky that I’m going to be able to try to do that,” he said.

“I am trying to become the kind of person that people can trust again,” he said.

Camerota asked Toobin at one point why he didn’t “have better judgment” after having covered the stories of Bill Clinton, Eliot Spitzer, Donald Trump, and Anthony Weiner.

“Because I didn’t have better judgment. Because I’m a flawed human being who makes mistakes,” he said.

Toobin was sidelined last October after what happened on the Zoom call became public.

When Vice heard about the incident and reported it, Toobin admitted that he “made an embarrassingly stupid mistake, believing I was off-camera.”

The New Yorker suspended Toobin and fired him a month later.

CNN took a different approach. The network said he asked for some time off “while he deals with a personal issue, which we have granted.” This turned into a leave of absence without any clear sign of whether he’d ultimately return.

Toobin’s viewers occasionally inquired about whether he’d be back on the air, and neither he nor CNN commented.

Some anchors and hosts at CNN also expressed a desire to have Toobin back on their shows, since he has been a leading legal voice on television for decades.

—@JeffreyToobin says he was told that The New Yorker reviewed his whole career and didn't find any other instances of misconduct. He adds that he feels firing him was "excessive punishment."

"But look, that's why they don't ask the criminal to be the judge in his own case." pic.twitter.com/mswiEcbBJZ