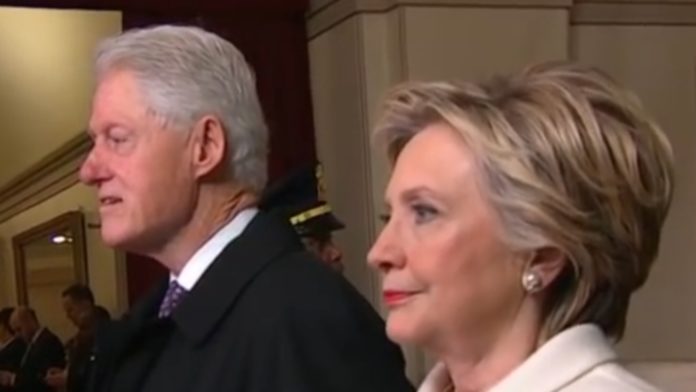 The news went from bad to horrific for the Clintons and their slush fund masquerading as a foundation. Look, all politicians are dirty, or most of them are, but the sheer arrogance of the Clinton’s grifting sets them apart.

So the tears will not fall for them if the walls cave on as two new shocking reports indicate is likely.

We have news that a federal judge ordered a narrow reopening of Hillary’scameil case and now we are learning the Clinton Foundation CFO has talked to investigators and some are saying may even turn informant.

From The Gateway Pundit:

John Solomon of The Hill reveals the story that has been percolating for a long time but kept tightly under wraps – because that is what serious prosecutors do, especially when grand juries are poring over evidence and issuing indictments that remain sealed until the right moment comes.  The trigger for the story coming out now probably is a House subcommittee hearing scheduled next week by Mark Meadows, chair of the House Freedom Caucus, while the GOP still can set the agenda of House hearings.

A GOP-led congressional subcommittee, led by Rep. Mark Meadows (N.C.), is planning to hold a hearing next week to review the work of John Huber, the special U.S attorney named a year ago to investigate all things Clinton.

It turns out that whistleblowers inside and outside the Clinton Foundation have amassed “6,000 pages of evidence attached to a whistleblower submission filed secretly more than a year ago with the IRS and FBI.”  Among that evidence can be found:

Those reviews flagged serious concerns about legal compliance, improper commingling of personal and charity business and “quid pro quo” promises made to donors while Hillary Clinton was secretary of State.

The submission also cites an interview its investigators conducted with Andrew Kessel that quotes the foundation’s longtime chief financial officer as saying he was unable to stop former President Clinton from “commingling” personal business and charitable activities inside the foundation and that he “knows where all the bodies are buried.”

From The Washington Post: A U.S. judge ordered the Justice and State departments Thursday to reopen an inquiry into whether Hillary Clinton used a private email server while secretary of state to deliberately evade public records laws and to answer whether the agencies acted in bad faith by not telling a court for months that they had asked in mid-2014 for missing emails to be returned.

The order risks reopening partisan wounds that have barely healed since Clinton’s unsuccessful 2016 presidential bid, but in issuing the order Thursday, U.S. District Judge Royce C. Lamberth said the spirit of the Freedom of Information Act required it.

In a narrow but sharply worded 10-page opinion, Lamberth wrote that despite the government’s claimed presumption of transparency, “faced with one of the gravest modern offenses to government openness, [the Obama administration’s] State and Justice departments fell far short” of the law’s requirements in a lawsuit for documents.

Lamberth wrote he took no pleasure in “questioning the intentions of the nation’s most august” Cabinet departments but said it was necessary when their response “smacks of outrageous misconduct.”

At best, Lamberth said the government’s actions reflect “negligence born of incompetence,” adding, “At worst, career employees in the State and Justice departments colluded to scuttle public scrutiny of Clinton, skirt FOIA, and hoodwink this court.”