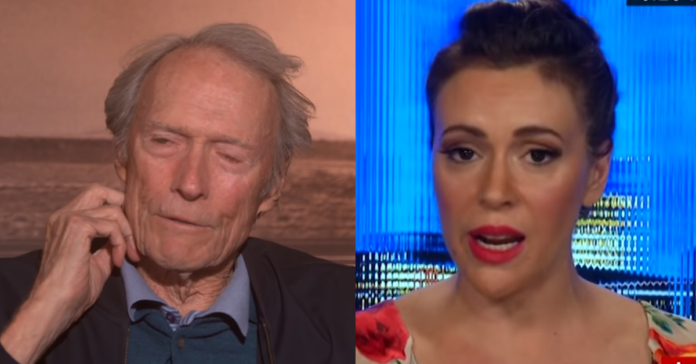 Another day, another devastating loss for the left and Alyssa Milano in particular. Milano led a Hollywood boycott of the great state of Georgia over a new abortion bill.

Many productions have pulled out of Georgia or threatened to while others have taken a wait and see attitude as the law has not officially taken effect. They hope to see it changed or even tossed by the courts.

Not Clint Eastwood who overruled Milano and her Hollywood friends and will film his new movie in Georgia no matter what.

From CNS: Despite the boycott of filming in Georgia launched by Hollywood liberals angry over the state’s new pro-life “Heartbeat” law, legendary actor/director Clint Eastwood will be making his latest movie, “The Battle of Richard Jewell,” in Atlanta this summer, reported NBC Charlotte and other media.

“Clint Eastwood will perform new film in Georgia despite abortion bill boycott,” tweeted NBC Charlotte on June 25. The movie is about Richard Jewell, a police officer and security guard who discovered a bomb at the 1996 Summer Olympics in Atlanta, Ga., and saved countless lives. Jewell was initially hailed as a hero and then was viewed as a suspect.

The heartbeat bill in Georgia prohibits abortion once a baby’s heartbeat starts, which is usually six weeks into pregnancy. The bill, signed into law in May, allows exceptions in the cases of rape, incest, or if the mother’s life is at serious risk.

One of the lead Hollywood activists to protest the new law is Alyssa Milano, and she helped organize the boycott of the Peach State.

In a letter to Georgia Gov. Brian Kemp, Milano — joined by 40-plus other actors and Hollywood activists — wrote, “As actors, our work often brings us to Georgia. We’ve always found your state to be populated with friendly and caring people. We’ve found the hotels in which we stay and restaurants in which we dine while filming there to be comfortable and of a high quality. We’ve been glad to bring billions of dollars in revenue to support Georgia’s schools, parks, and communities.

“But we cannot in good conscience continue to recommend our industry remain in Georgia if H.B. 481 [heartbeat bill] becomes law…. [W]e will do everything in our power to move our industry to a safer state for women if H.B. 481 becomes law. You have a choice, gentlemen. We pray you make the right one.”

Some of the actors slated to work on the Eastwood film include Kathy Bates, Olivia Wilde, Jon Hamm and Sam Rockwell.

Clint Eastwood, 89, has worked in television and movies since the mid-1950s. He has won 13 Academy Awards (nominated 40 times) and won 8 Golden Globe awards (nominated 32 times).