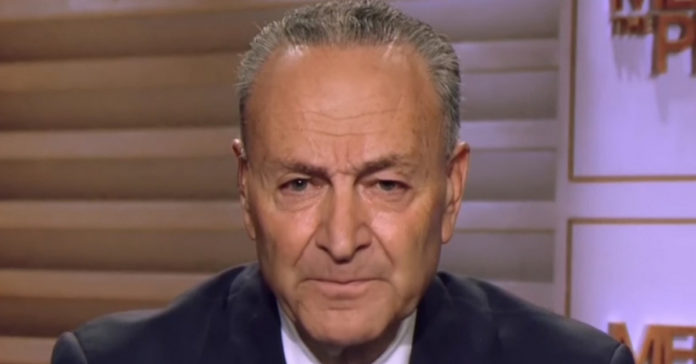 Chuck Schumer went out on the Sunday TV shows and actually threatened President Trump over border security and in doing so exposed the left as a bunch of charlatans.

The ever-hapless Chuck also took time to insult over half the population of America when he dismissed the entire border security debate as a stunt to appease the base.

This again proves the left is not reading the tea leaves on immigration and may very well undo all their recent midterm gains because there is huge support across all America for better border security.

From BPR: As the threat of a government shutdown looms amid ongoing disputes about the federal budget, Democrat Senator Chuck Schumer once again vowed to obstruct President Trump’s border wall.

“President Trump should understand that there are not the votes for the wall in the House or the Senate,” Schumer said on “Meet the Press.” “He is not going to get the wall in any form.”

Schumer said Democrats won’t give President Trump an inch to secure the US border, which would cut down on illegal drugs, human trafficking, MS-13 gang activity, and widespread abuse of the US welfare system.

We should not let a temper tantrum and threats push us in the direction of doing something that everybody knows is wrong.

If the President wants to debate the wall next year, he can. I don’t think he’ll get it. He shouldn’t use innocent workers as hostage to throw a bone to his base.”

“Throw a bone to his base?” Really?

White House senior adviser Stephen Miller said all Americans must support the border wall because our national sovereignty is at stake.

“This is a very fundamental issue,” Miller told CBS News. “At stake is the question of whether or not the United States remains a sovereign country. The Democrat Party has a simple choice: They can either choose to fight for America’s working class or to promote illegal immigration. You can’t do both.”

So they’re just — they want Trump to lose more than they want the country to win. They voted for vast — large amounts of money to secure the border before, they just don’t want to do it for Trump.

Here’s what I would tell the president, if they voted for $25 billion in February of this year — insist on $5 billion now.”