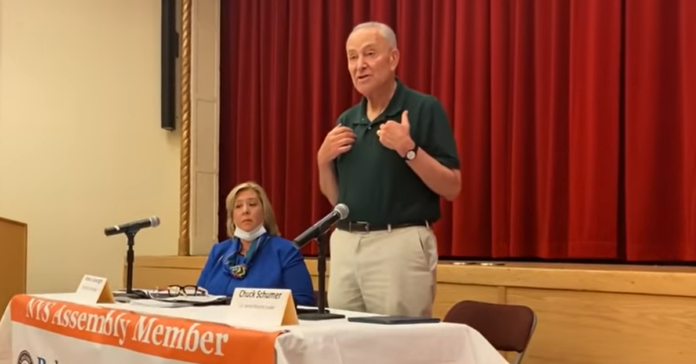 Schumer said that Trump voters chose to cast their vote for a “despicable,” “racist,” and “vile” man. Schumer then said Trump is “dishonest and divisive.”

“How could 74 million people vote for such a despicable human being as Donald Trump?” Schumer says in the video below.  “I don’t care if you’re a liberal or a conservative, Democrat or Republican, he is a vile man.”

Schumer continued “He is dishonest, divisive. That’s what he loves to do.

“Just divide and have people fighting with each other.

“And he always appeals to the dark side of human nature.”

In 2016 Hillary Clinton made a flub that came back to haunt her campaign when she called Trump voters a “basket of deplorables.”

“You know, to just be grossly generalistic, you could put half of Trump’s supporters into what I call the basket of deplorables. Right?

“The racist, sexist, homophobic, xenophobic, Islamophobic – you name it.

“And, unfortunately, there are people like that. And he has lifted them up.

“He has given voice to their websites that used to only have 11,000 people, now have 11 million. He tweets and retweets offensive, hateful, mean-spirited rhetoric,” she said.

Yet, as over a dozen Democrat-run cities defund their police departments, Joe Biden refuses to condemn those in his party endangering our communities. https://t.co/IzHD7WJWOX

Judge Throws Book At Dem Mayor, Sentences Him To 6 Years In Prison For ‘Reprehensible’ Corruption

AOC Revolts, Threatens To Sink Biden’s Agenda: “I will not vote for an infrastructure bill unless we have reconciliation ready to go”

Nancy Pelosi Goes To Europe, Publicly Trashes Trump Supporters: “Been hijacked by a cult that is just not good for our country”