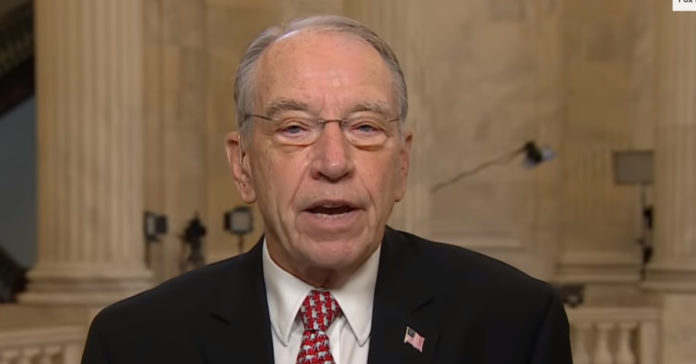 Chuck Grassley is done playing games and wants answers to what was the FBI doing when they raided a Clinton Foundation whistleblower.

Dennis Cain, a former FBI contractor, blew the whistle on some shady dealing surrounding the Clinton Foundation and the scandalous Uranium One deal.

The Clintons have no credibility left and anyone still protecting their devious schemes should face the music but first, we need answers.

The whistleblower, Dennis Cain, who was once employed by an FBI contractor, reportedly turned over documents to the Department of Justice Inspector General Michael Horowitz regarding the bureau’s failure to investigate potential criminal activity regarding former Secretary of State Hillary Clinton, the Clinton Foundation and the Russian company that purchased Uranium One.

Grassley sent a letter to Wray on Nov. 30 asking pointed questions about the raid on Cain’s private residence in Union Bridge, Maryland.

This is the letter Chuck sent the FBI:

On November 19, 2018, the Federal Bureau of Investigation (FBI) reportedly raided the home of a former FBI contractor, Mr. Dennis Nathan Cain, who reportedly made disclosures to the Department of Justice Office of the Inspector General in accordance with the Intelligence Community Whistleblower Protection Act (ICWPA).

General later provided to the House and Senate Intelligence Committees. These documents relate to the Clinton Foundation and Uranium One transaction.

To better understand the FBI’s basis for performing the raid, please answer the following no later than December 12, 2018:

Was the FBI aware at the time of the raid that Mr. Cain had made what appeared to be lawful disclosures to the Inspector General?

If so, was the FBI aware that these disclosures were passed to the House and Senate Intelligence Committees, per the ICWPA process?

Does the FBI consider Mr. Cain’s disclosures to be protected? Please explain?

On what basis did the FBI decide to carry out the aforementioned raid on November 19, 2018?

Please explain and provide a copy of the warrant and all supporting affidavits.

Did the materials seized by the FBI during the raid contain any classified information?

If so, was that information classified at the time Mr. Cain brought them to his residence? I anticipate that your written reply and most responsive documents will be unclassified.