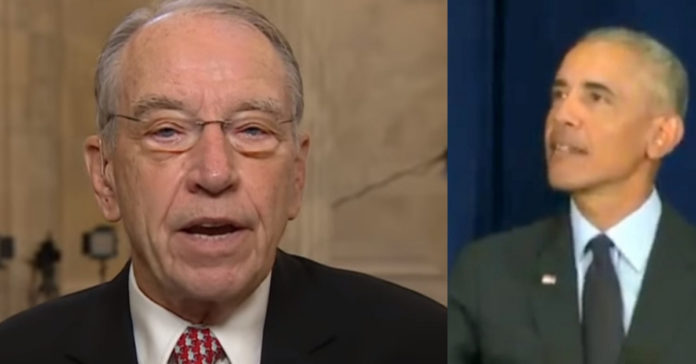 Chuck Grassley just made is move and much to the horror of the liberal media complex – this new investigation is bipartisan.

Chuck wants to look into meetings that took place with Russians and some of the Obama’s administrations top economic advisors.

This is a surprise that came from left field and could have a major impact on the ongoing Trump Russia investigation. If you recall, Treasury officials under Obama have also been under investigation for sending information to their Russian counterparts.

Look, it is possible both sides are lousy with Russian influence and Russian money because our campaign finance system is a joke. From Reuters:

The U.S. Senate Finance Committee has launched an inquiry into meetings in 2015 between top Obama administration officials, a Russian central banker and Maria Butina, who has pleaded guilty to conspiring to work as a Russian agent to influence American foreign policy.

The bipartisan inquiry, announced jointly by the panel’s Chairman Charles Grassley and ranking Democrat Ron Wyden, was sparked by an exclusive Reuters article from July.

That report revealed details about previously unreported meetings in 2015 set up by the Center for the National Interest, a Washington foreign policy think tank that is supportive of efforts to improve U.S.-Russia relations.

The meetings were documented in a Center for the National Interest report seen by Reuters which discussed arranging the meetings to bring together “leading figures from the financial institutions of the United States and Russia.”

Torshin was sanctioned last April by the Treasury Department, and he is referenced in court records as an unindicted co-conspirator who worked with Butina to infiltrate the National Rifle Association (NRA) and make inroads in conservative political circles to help benefit Russia.

A spokeswoman for the Russian central bank has previously said that Torshin declines to comment on the subject.

“A critical issue facing the Committee and the country is the extent to which the Russian government engaged in efforts designed to undermine our political system and governmental policy through obfuscation and manipulation,” Grassley and Wyden wrote in their letters.

Paul Saunders, the Center for the National Interest’s executive director, previously told Reuters it was unaware of any inappropriate conduct or connections to Russian intelligence services involving Butina and Torshin.

In their letters, Grassley and Wyden said they are asking the think tank for records related to meetings it organized.

“It is concerning that Ms. Butina and Mr. Torshin were able to gain access to high-level administration officials responsible for U.S. economic and monetary policy to reportedly discuss U.S. Russian economic relations,” the lawmakers wrote.