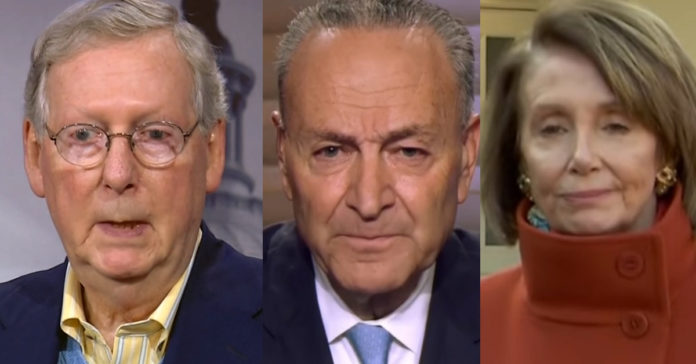 Chuck Schumer and Nancy Pelosi are throwing a bit of a temper tantrum over the impending government shut down and are refusing a last-minute deal by Mitch McConnell.

One bill authorized $1.6 billion and Trump wanted $5 billion to go towards renewed border security and the wall. Mitch came through with a compromise of $2.6 billion and Nancy rudely rejected it calling it a slush fund.

Chuck had a bit of a meltdown and made a promise his mouth may not be able to keep.

From Breitbart: During a press conference on Tuesday, Senate Minority Leader Chuck Schumer (D-NY) stated that the White House would need Congressional approval to get wall funding from another part of the government, and they will not get that approval.

Schumer said he received an offer from Senate Majority Leader Mitch McConnell (R-KY) for $1.6 billion for border security plus a $1 billion “slush fund for the president to use for his radical immigration agenda.” Schumer added that he told McConnell he wouldn’t accept the slush fund.

Schumer further stated, “And as for the idea of what [Sarah Huckabee Sanders] said, they could get wall money from NAFTA or some other part of the government, they need Congressional approval. They’re not getting it for the wall, plain and simple.”

From Breitbart: Tuesday House Minority Leader Nancy Pelosi (D-CA) told reporters she would not accept the White House’s proposal to avoid a government shut down.

Pelosi said, “What Senator Schumer and I, Leader Schumer and I have said that we cannot accept the offer they made of a billion dollar slush fund for the president to implement his very wrong immigration policies. So that won’t happen.”

She added, “We have said before very clearly that we could possibly come together around a CR for all seven bills. Better than that, six bills that have already passed the Senate committees and one bill that is CR for Homeland Security. So six and one or all seven under a CR.”

When asked if the White House is “backing off”, Pelosi said, “Yes, but the $6 billion as a slush fund in addition to the money that would be in the bill this year is not acceptable.”

.@SenSchumer: "The Republican offer today would not pass either chamber."