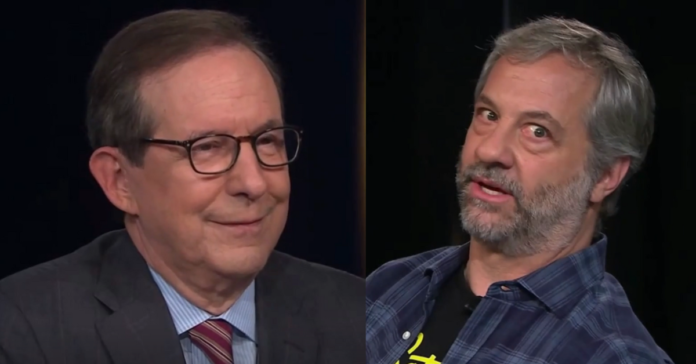 CNN anchor Chris Wallace slobbered all over Hollywood mogul Judd Apatow telling the filmmaker the jokes he wrote for former President Barack Obama’s White House Correspondents’ Dinner (WHCD) were a “beatdown” of then star of The Apprentice Donald Trump.

Wallace also said Apatow’s ‘beatdown and that humiliation’ of Trump caused Donald to finally throw his hat in the ring.

Wallace said: “It has been suggested that you are responsible for Donald Trump becoming president of the United States,” Wallace said in a recent episode of HBO Max’s Who’s Talking to Chris Wallace. Apatpow wasn’t having it and said, “How dare you.”

Wallaces continued: “And you know the allegation, the assertion — which I think even David Axelrod made — which was that you participated in writing jokes for Barack Obama for the 2011 White House Correspondents Dinner, where he famously went after a fellow in the audience named Donald Trump.

“And this was, this is for a real estate mogul.

“He’s not anything in terms of politics at that point.

“You know, a lot of people say it was because of that beatdown and that humiliation that Trump finally decided, after flirting with it for a long time, yeah, I’m gonna run.

“So my question is, Judd, has that been hard to live with?”

“I don’t believe that history is true.

“That was the night that Bin Laden was killed.

“It was 2011, so it was five years before Trump ran for president.

“And I think that he always was flirting with it.

“I saw the Roger Stone documentary, and I think every four years, he almost got into the game.

“I think his calculation to get into the game was not like, ‘Oh, four years ago, someone made a joke.

“I think he certainly, as we’ve seen, wanted to be in power.”

Wallace slobbered over Judd claiming that the jokes were a “beatdown,” saying, “I think you are underestimating the power of your beatdown of Donald Trump and the scars that it left.”

“Thank you and I will try to rock these endings a little bit harder.

VIDEO – Chris Wallace Laughs It Up with Obama Jokewriter Judd Apatow over ‘Your Beatdown of Donald Trump and the Scars That It Left’ https://t.co/aWwYHR1jEw