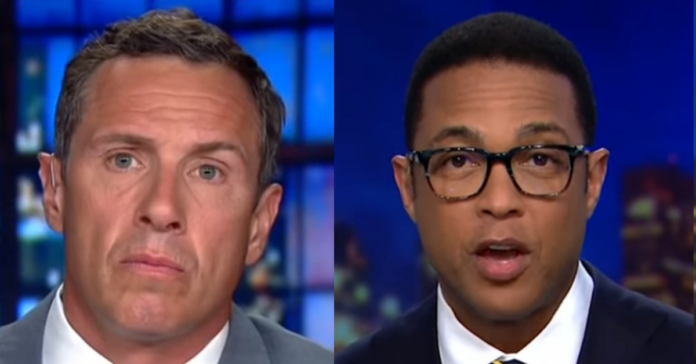 Lemon and Trump at one point seemed to get along but those days are long gone and he has made a habit of ripping Trump mercilessly from his perch at CNN.

And in that way, they will continue to lose national elections. From The Daily Mail:

While handing over to colleague Chris Cuomo, Lemon questioned whether the news media should continue to give Trump so much coverage in the ‘post-truth era’.

The debate began with Cuomo describing the 2020 election as the most ‘definitional’ in his lifetime.

Lemon then asked if those who voted for Trump in 2016 would now question their choice after seeing his first term in office and ‘continue to fall for the o-ke-doke’.

The CNN Tonight host also questioned the media’s role in covering Trump and asked whether ‘bad people’ should be given a platform.

Lemon said to his colleague to ‘think about the most despicable people in history’ and warned him that he was using an ‘extreme example’.

‘If you could look back at history would you say, ”I’m so glad that that person was allowed a platform to spread their lies and propaganda?” Or would you say that probably wasn’t the right thing to do to spread that because you knew in that moment that that was a bad person and they were doing bad things and not only were they hurting people, they were killing people.’

Cuomo then stepped in and warned, ‘I think that the example matters’ and pushed back against Lemon.

He responded: ‘That’s a very extreme example – rhetoric that you don’t like, could that be a slippery slope towards violence? Maybe, maybe not.’

But Lemon said Trump’s stance on the so-called Central Park Five who were exonerated of rape as well as the president’s comments on immigrants and the Charlottesville violence made it ‘a life or death issue’ for people of color.

But Cuomo then added: ‘Comparing anything to an extreme like a Hitler weakens the argument.

‘A man who is abusive of the truth and is obnoxious for effect and panders to a group of people in this country is not necessarily a step away from a genocidal maniac.’

But Lemon then said he was not comparing Trump to Hitler, but offsetting the coverage a ‘bad person’ should be given.

He said: ‘I’m not comparing him to that, I’m comparing the way you would cover someone who is a bad person who does bad things.

‘It starts with little lies, that become bigger lies. Good people follow bad people, it doesn’t mean that you are a bad person, it just means they were used.’