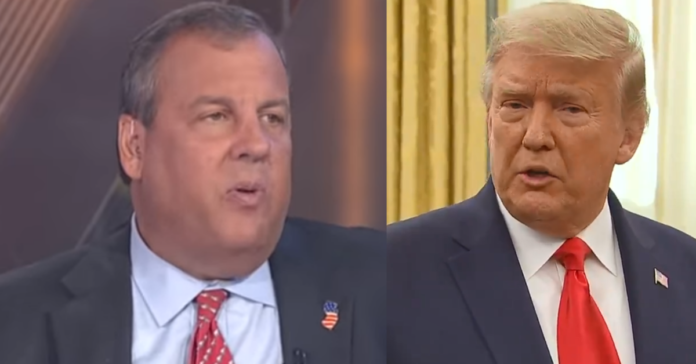 Former New Jersey Gov. and failed presidential candidate Chris Christie just threw down a marker and stabbed Trump in the back in the process.

It didn’t take long for the knives to come out and Christie just threw the first one and said he may challenge Trump in 2024 if POTUS runs again.

Christie was asked today by Hugh Hewitt if he’d rule out a run of his own if Trump decides to launch a 2024 campaign.

“If President Trump decides to run in 2024, are you ruling out running against him?” Hewitt asked.

“You know, it’s, the President is very, very focused now just on his continued concerns about how the election went,” Chris continued.

“Those are things that he and I do not agree on.”

“And so I try not to agitate him too much.”

“But listen, I’ve been his friend for 20 years. I’ll continue to be his friend.”

“But on this one, we have a fundamental disagreement,” Christie added before saying Trump should go to Biden’s inauguration.

“I think he should. I think these types of rituals and traditions and norms are important in our democracy,” Christie said.

“But I’m doubtful that he will.”

Here is my interview this morning with ⁦@hughhewitt⁩ to discuss my PSA on the importance of wearing a mask and the future of the GOP. #WearAMask https://t.co/BIasNU70PN