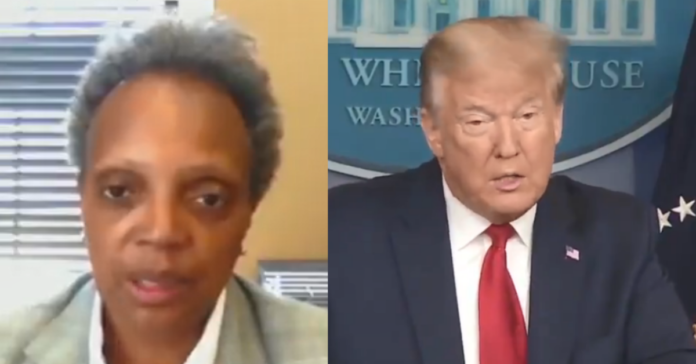 Chicago Mayor Lori Lightfoot should be hanging her head in shame after a stunning new report from the Chicago Sun-Times makes clear how badly she is failing.

“As we continue moving more officers into the districts and closer to our communities, we have also been focused on creating teams that can address violent crime head-on within our most vulnerable neighborhoods,” CPD Supt. David Brown said earlier in the month. “Our officers will engage directly with residents. We will hear their concerns, and continue to work in partnership with them as part of an all-hands-on-deck effort to curb the violence in our communities.”

From The Chicago Sun-Times:

Murders more than doubled last month in Chicago compared to the same month last year, according to new data released by Chicago police.

Still, police reported that overall crime in the city has decreased so far this year.

The Sun-Times reported 106 homicides across the city in July, bringing the total number of homicide cases this year to 430 as of Friday night.

Murders are up 51% from the same point last year, along with a 47% increase in shootings, police said.

Last month, 573 people were shot in the city — at least 58 of them juveniles, including a 9-year-old boy killed by gunfire Friday night as he played outside on the Near North Side, according to Sun-Times records.

The month’s youngest shooting victim was a 3-year-old girl who was struck July 22 while riding in her family’s car in South Shore.

A day before that, the city saw the largest mass shooting in recent memory when 15 people were shot outside a funeral home in Gresham on the South Side.

The month opened with a bloody Fourth of July weekend that saw 79 people shot across the city, 15 of them fatally.

Eleven of the holiday weekend’s victims were minors, and two of them — 13-year-old Amaria Jones and 7-year-old Natalia Wallace — were killed.

Three Chicago police officers were wounded when a man in custody opened fire Thursday morning at the Grand Central District police station in Austin with a gun he had allegedly kept hidden when he was arrested.

We must and will hold those responsible for this shooting accountable. I ask all residents with information on this incident to submit a tip anonymously at https://t.co/JVXGpQxj99.