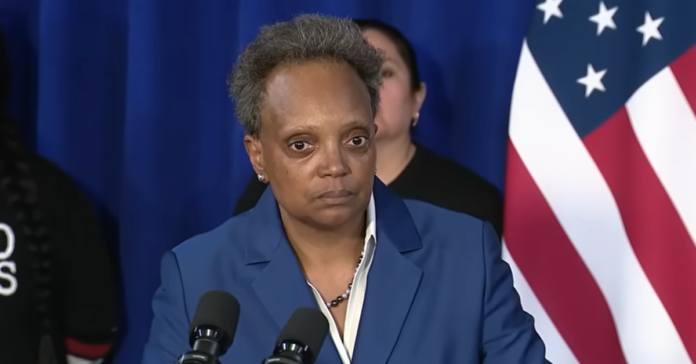 A Chicago reporter has reached his limit with Lori Lightfoot and his taking the Chicago Mayor to court for her “attack on the First Amendment.”

“I was asking the obvious questions, and she lost her temper,” journalist William Kelly told Fox News about a May exchange when she told him he was “full of crap.” Kelly had his press credentials revoked by the Mayor’s staff.

“Mayor Lightfoot is in re-election mode, and she doesn’t want any more embarrassing questions to go viral. So she revoked my media credential. This is a very serious constitutional crisis in the city of Chicago.

“She wants to win this case against me and then expand this attack on the First Amendment to all the reporters who ask her real questions or any reporter nationally who would dare to ask a real question of a powerful politician.

While Mayor Lightfoot talks about mass shootings elsewhere in the country, this is what happens for the victims of gun violence in Chicago — a good, important story @RosemarySobol1 @JakeSheridan_ https://t.co/nTdRKJDQl5 https://t.co/GFnfmG88iN

“The problem is that he sat down and wrote me a letter telling me that he was revoking my media credentials when the police department is down 1,500 officers, we have an out-of-control crime epidemic, police suicide is at an all-time high.

“He’s taking time out of his day to write me a letter telling me that he’s revoking my media credential.

“I think the priorities are completely out of whack,” he said.

Hat tip @chasejohn for sharp editing on this, legend has it I turned in my original copy in crayon https://t.co/a1d3LJmCXq

Willie Wilson challenged Chuy Garcia to give up his congressional salary and “give it to the citizens” as he runs for mayor. https://t.co/VX9Y9tlBUI

Lauren Boebert Sets Her Critics Straight: “The Left is pissed I won my election, so they’re trying to find something to go after me...

Elon Musk Issues Warning To Hollywood: “The woke mind virus has thoroughly penetrated entertainment and is pushing civilization towards suicide, there needs to be...

Jake Tapper Shuts Down Democrats Gloating Over Midterms: ‘You’re portraying a very rosy scenario about how well Democrats are doing, you just lost the...