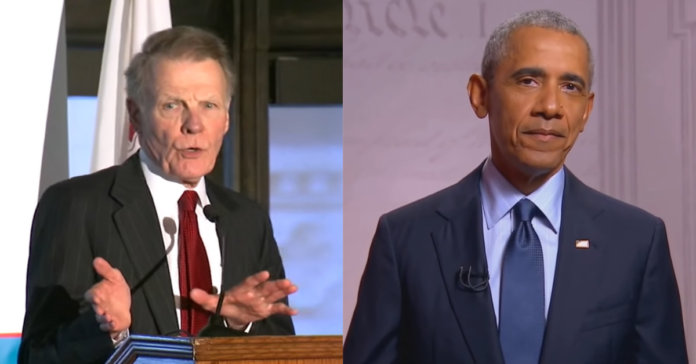 Former Illinois House Speaker Michael Madigan (D), a longtime major Dem powerbroker in Chicago is resigning from the state legislature as his bribery investigation heats up. This guy has been around a long time, at the highest levels of state government – he knows who did what and with whom – and if he starts talking you may see some national political figures fall from grace.

The Department of Justice has been investigating the Chicago machine for years and just to tell you had bad it is going to get for this guy, and anyone he has dirt on, multiple politicians and businessmen flipped years ago in this probe and have been wearing wires for the Feds ever since. They didn’t just wear a wire for a few conversations or a few months. They wore wires on Chicago’s top politicians for years. For years.

While it is true Barack Obama and Madigan were not close allies, Chicago Tribune reporter John Kass noted that it was Obama, interfering at the state level (Trump was always criticized for doing the same), that kept Madigan in power longer to do more damage by helping him withstand a challenge from a rival politician.

Kass titled his piece in 2016, Obama backs Boss Madigan the Chicago Way, and he wrote: “The president (Obama) is making it clear he wants Illinois House Speaker Michael J. Madigan, boss of the Illinois Democratic Party and ruler of the state, to keep ruling as he’s done for decades, even as middle-class taxpayers flee like frightened refugees.

Obama did so by reaching down from Olympian heights to a state representative contest in the March 15 Democratic primary.

He endorsed Juliana Stratton over incumbent Ken Dunkin, who dared break with Madigan and side with Gov. Bruce Rauner and threaten the boss’ rule.

The president of the United States makes an endorsement in a state rep primary and cuts commercials?

Madigan released a statement: “Today I am announcing that I will resign as state representative of the 22nd district at the end of the month. It has been my great honor to serve the people of Illinois as speaker of the House and state representative of the 22nd District. This journey would not have been possible without my wonderful wife, Shirley, and children, Lisa, Tiffany, Nicole and Andrew, who have stood by my side year after year, providing their love and support despite the pressure of growing up in the public spotlight. I am fortunate to have them in my life.

“Fifty years ago, I decided to dedicate my life to public service. Simply put, I knew I wanted to make a difference in people’s lives. I believed then and still do today that it is our duty as public servants to improve the lives of the most vulnerable and help hardworking people build a good life. These ideals have been the cornerstone of my work on behalf of the people of Illinois and the driving force throughout my time in the Illinois House.

“As speaker, legislator and member of the Illinois Constitutional Convention, I worked to make the General Assembly a co-equal branch of government, ensuring it acted as a check on the power of the governor and the executive branch, especially around a governor’s abuse of the amendatory veto. Many heated battles were fought to keep governors from rewriting legislation sent to them by the General Assembly.

“I am particularly proud of our work to increase the diversity of voices in the House Democratic Caucus to include more women, people of color and members of the LGBTQ community. In my tenure as Illinois House speaker, we worked to elect representatives across all backgrounds and beliefs to truly represent the interests of the people of our state.

“With the partnership of this diverse and talented group of Illinois Democrats and with our colleagues across the aisle, we were able to level the playing field and strengthen the middle class while workers in other states saw their wages diminished.

“We achieved school funding reform to increase investment for schools in need and address inequalities in our state’s education system. We made Illinois a welcoming state by passing the Illinois Dream Act and providing drivers’ licenses for undocumented residents.

“We strengthened the rights of workers, increased the minimum wage, expanded access to health care for Illinois’ most vulnerable residents, and protected a woman’s right to make her own health care decisions.

“We upheld the rights of all Illinois residents by passing marriage equality, finally recognizing the rights of men and women to marry the people they love. We enacted criminal justice reforms to break down laws that too often target people of color and led the country in expanding voting rights as other states weakened them.

“Collaborating with leaders in the retail, hospitality, manufacturing, health care and other industries, we built a partnership with job creators to encourage economic development and address crises in our unemployment insurance and workers’ compensation systems. We also expanded opportunities in the tourism and film industry, created the Metropolitan Pier and Exposition Authority that reinvented McCormick Place and Navy Pier, and established the Illinois Sports Facility Authority that kept the White Sox in Chicago.

“When were confronted with the Rauner administration and the interests of the wealthy, who sought to weaken unions and the labor movement in Illinois, we stood up for working people.

Rauner went on to plunge our state into a budget crisis, nearly bankrupting social service agencies, eliminating funding for higher education, and racking up billions of dollars in state debt in the process. House Democrats stood as the last line of defense to protect our state from collapse.

“Under my leadership, we increased transparency of state and local government by creating the Freedom of Information Act and protecting it from attempts to water it down, impeached Rod Blagojevich and repeatedly strengthened the state’s ethics and campaign finance laws.”

“It’s no secret that I have been the target of vicious attacks by people who sought to diminish my many achievements lifting up the working people of Illinois. The fact is, my motivation for holding elected office has never wavered. I have been resolute in my dedication to public service and integrity, always acting in the interest of the people of Illinois.”

“My achievements would not have been possible without the hard work and commitment of many members of my staff through the years. I thank them for their efforts on behalf of the House Democratic Caucus and the people of Illinois. I also want to thank the many volunteers and supporters who worked on behalf of the residents of the 22nd District. It is with the collective support of many that we have made Illinois a bastion of Democratic values.  “I leave office at peace with my decision and proud of the many contributions I’ve made to the state of Illinois, and I do so knowing I’ve made a difference.”